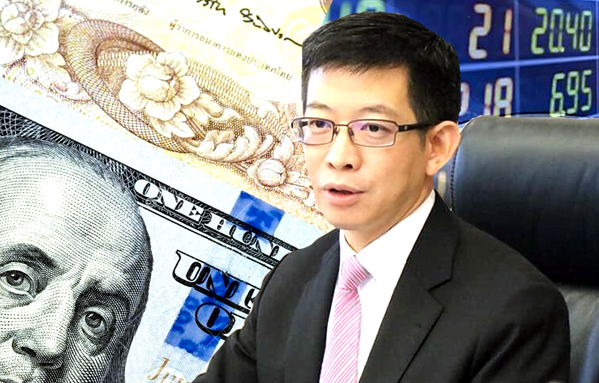 Many analysts believe that there is a strong geopolitical impetus in the current policy being pursued by the Federal Reserve in Washington DC which may mean further tough medicine being dished out which is negatively impacting emerging economies. Thailand’s economy has been protected from this to a great extent, by its stable financial system and healthy foreign exchange reserve buffer. In the last few months, however, this has been falling and may be needed in 2023 as economic turmoil across the world, driven by the war in Ukraine and rising US-Chinese tensions may be only beginning.

A former minister at the Prime Minister’s Office and now a senior Vice President with Bangkok Bank, Dr Kobsak Pootrakool, has urged the central bank to preserve Thailand’s Foreign Exchange Reserves and let the baht float on the market as he predicts 2023 will see a deterioration of economic conditions caused by geopolitical tensions and set in motion by the US Federal Reserve tightening of monetary policy which has just begun to make an impact and already caused severe problems for countries such as Laos, Pakistan, Bangladesh, Sri Lanka and economies in central America. Dr Kobsak’s warning comes as the country’s foreign exchange reserves fell by $13.2 billion from September 2nd to September 30th alone and came with confirmation last week that the Bank of Thailand had intervened in foreign exchange markets in response to volatility and a depreciating Thai baht.

On Wednesday, Thailand’s inflation rate for September was revealed at 6.41%, slightly lower than a Reuters poll at 6.6% but still well ahead of the Bank of Thailand’s targeted range of 1% to 3%.

It comes as the bank maintains its comparably weaker monetary policy with only gradual 25 basis point interest rate rises and a projected rate of only 1.25% by the end of 2022 compared to at least 4% in the United States.

Governor Sethaput Suthiwartnarueput took the opportunity, this week, to again underline the bank’s determination to maintain this ‘gradual’ approach to tightening monetary policy to preserve the country’s weak GDP growth rate for 2022 projected to come in at between 2.9% and 3.5%.

It came as the Thai cabinet meeting this week unusually on Wednesday, pledged to not interfere with the baht but to have the Ministry of Finance pass on the relevant information to the central bank which is independent of the government and tasked with preserving financial stability and fighting inflation.

Excluding energy and food prices, the Consumer Price Index for September stood at 3.12% from 3.15% in August.

Dr  Kobsak Pootrakool, a top executive with Bangkok Bank and formerly a senior official at the Prime Minister’s Office under Prime Minister Prayut Chan ocha has warned Thai economic planners that they need to prepare for 2023.

He predicts a tougher economic challenge or even crisis by the middle of next year.

The Bank of Thailand has already cut back its projection for economic growth in 2023 from 4.2% to 3.8% amid gathering economic storm clouds set in motion by the Federal Reserve’s hawkish interest rate policy.

On Tuesday, Dr Kobsak warned the central bank that it must preserve the kingdom’s foreign exchange reserves which he believes will be badly needed in the year ahead and particularly in the middle of 2023.

Last week, the Bank of Thailand confirmed to the market that it had been intervening to prop up the baht and on several occasions in recent days breached the ฿38 to the dollar barrier before falling back.

Thailand posted a current account deficit of $3.5 billion in August with a 23.6% rise in imports compared to an 8.3% rise in exports.

This followed a revised deficit of $4.2 billion for July even as foreign tourists to the kingdom for the first time since the pandemic exceeded 1 million visitors per month.

The continued trade deficit comes also with a flow of capital out of the country driven by higher interest rates on offer not just in the United States but also in other countries in Southeast Asia.

Foreign Exchange reserves fell by $13.2 billion in September as bank confirms it is managing the baht

Current data available just up to the 30th of September shows the kingdom’s foreign exchange reserves at only $202.8 billion having lost $13.2 billion alone since September 2nd last.

‘The economic crisis will occur in emerging market countries in the middle of next year. We must act not to be victims. Thailand must have sufficient reserve funds. Because every country has problems which occurred because the reserves were lost. So Thailand has to preserve the reserves. Thailand will have to spend a lot of money in the middle of the year,’ Dr Kobsak explained at a seminar in Bangkok.

Economic decisions taken by the Federal Reserve in Washington DC are directly impacting Thailand’s economy and world markets, fear of a growing crisis

The warning comes as the pressure on the baht appears to have eased in recent days as commentators in the United States such as respected investment strategist Ed Yardeni have been wheeled out to argue that the current Federal Reserve strategy runs the risk of breaking world international markets with turmoil seen last week concerning the pound sterling and similarly a very dangerous situation in China with the falling Yuan.

Despite this, Mr Yardeni says that another Federal Reserve interest rate hike will be seen in November of 0.75% bringing US interest rates to between 3.75% and 4%.

Before this, the market in the United States had accepted that a second rate rise in December would see rates hit 4.5% with some hawks even suggesting further, smaller 25 basis point rises in 2023.

‘I think it’s already breaking. What’s breaking is the soaring dollar. A soaring dollar has been associated in the past with creating financial crises on a global basis. We have to have a global perspective on all of this, and this tight monetary policy here is having a tremendous impact on the rest of the world, especially in emerging markets,’ the investment and market expert disclosed to viewers on Bloomberg TV. ‘I think they have one more rate hike coming in November and that will be it because the financial stability issue will pop up as a primary concern.’

Financial markets in the United States are awaiting inflation data for September while the August rate of 8.3%, although off the June peak of 9.1% and with spiralling inflation in Europe, will hardly lead the Federal Reserve to let its foot off the pedal no matter what some experts suggest.

There is also new information being rolled out to suggest that the US economy is weaker and less resilient than previously thought but the resolve of the Federal Reserve does not yet appear to have weakened as it focuses on killing the threat of rising inflation as the overriding goal of its policy, a proven approach from the late 1970s and 1980s under Federal Reserve Chairman Paul Volcker.

Lower business investment in the US and low inventory levels all point to an economy that most experts agree is in recession although this is qualified as a ‘growth recession’ meaning the economy can be expected to quickly recover.

With the Organisation of the Petroleum Exporting Countries (OPEC) this week announcing plans to cut production led by Saudi Arabia and Russia, there is also a growing and strong geopolitical aspect to the current economic developments as Russia and also China wish to see higher inflation in the world and particularly in western economies to influence public opinion against the resolute policy of the Biden Administration not only against Russia regarding Ukraine but also concerning China over Taiwan.

These unsettling geopolitical tensions which appear to be also now feeding into economic policy, are behind the warning from Dr Kobsak this week that Thailand has to maintain its financial reserve buffer and let the baht float or appreciate if that is the direction of the market.

The top banking official said that Thailand’s economic prospects have regressed over the last 6 months and the government must prepare for the challenge ahead.

Dr Kobsak, citing Bank of Thailand data, warned that buoyant consumption after the country fully reopened from the pandemic that propelled Thai economic growth in recent months is tapering off while the rate of export growth has fallen back in June, July and August with Thai exporters now only predicting an annual 8% growth rate in 2022 where some forecasters had earlier suggested 11%, is part of a trend that is just beginning.

This was amplified by Minister of Finance Arkhom Termpittayapaisith on Wednesday who suggested that while the baht was weaker, severe supply chain problems linked to the automobile and electronic sectors were beginning to hinder the country’s export drive.

This is believed to be linked to a deterioration of manufacturing performance and conditions in China which has been seen to directly impact Thailand’s output since 2019.

The Senior Vice President with Bangkok Bank warned that the country’s economic fortunes currently rested with the kingdom’s tourism recovery but even here, there has been a lack of anticipated growth with predictions for arrivals in 2022 now falling to between 9 and 10 million with dramatic growth in the proportion of Asian visitors with less to spend.

Currently, the Bank of Thailand is predicting 3.3% growth for the Thai economy this year but Kasikorn Research Centre, the research arm of Kasikorn Bank only projects this at 2.9%.

This week, the Joint Standing Committee on Commerce, Industry and Banking (JSCCIB) projected a rate of 3% to 3.5% for growth in 2022

Dr Kobsak suggested that Thailand’s interest rate of just over 1% now and projected to be 1.25% after November, may leave the Bank of Thailand forced to raise interest rates again in 2023.

Economic expert cites the crises already seen in emerging economies such as Laos, Pakistan and Sri Lanka as a cautionary example for Thailand

He cited the extreme hardship and financial problems in Laos, Myanmar, Bangladesh, Pakistan and Sri Lanka as a warning to Thailand.

He said that similar problems were also being seen in central American economies as the continued impact of geopolitical tensions takes hold.

He suggested that the real impact of the Federal Reserve’s hawkish monetary policy will only come to be felt in the middle of 2023 when the external world economy will present Thailand with an even greater challenge than it has experienced in 2022.

He said the current economic setback for emerging economies will do lasting damage and it will be quite a while before the emerging world will recover and regain its competitiveness.

The former government official, on the other hand, pointed out that a weaker baht has the potential to boost exports and foreign tourism and believes that Thailand should be focused on marketing the country externally to foreign tourists at this time.

The former minister at the Prime Minister’s Office also praised efforts by the current government to offer new long-term visas to wealthy investors saying that any move to boost confidence in Thailand among the foreign investment community has a critically important role to play given the challenges that lie ahead.