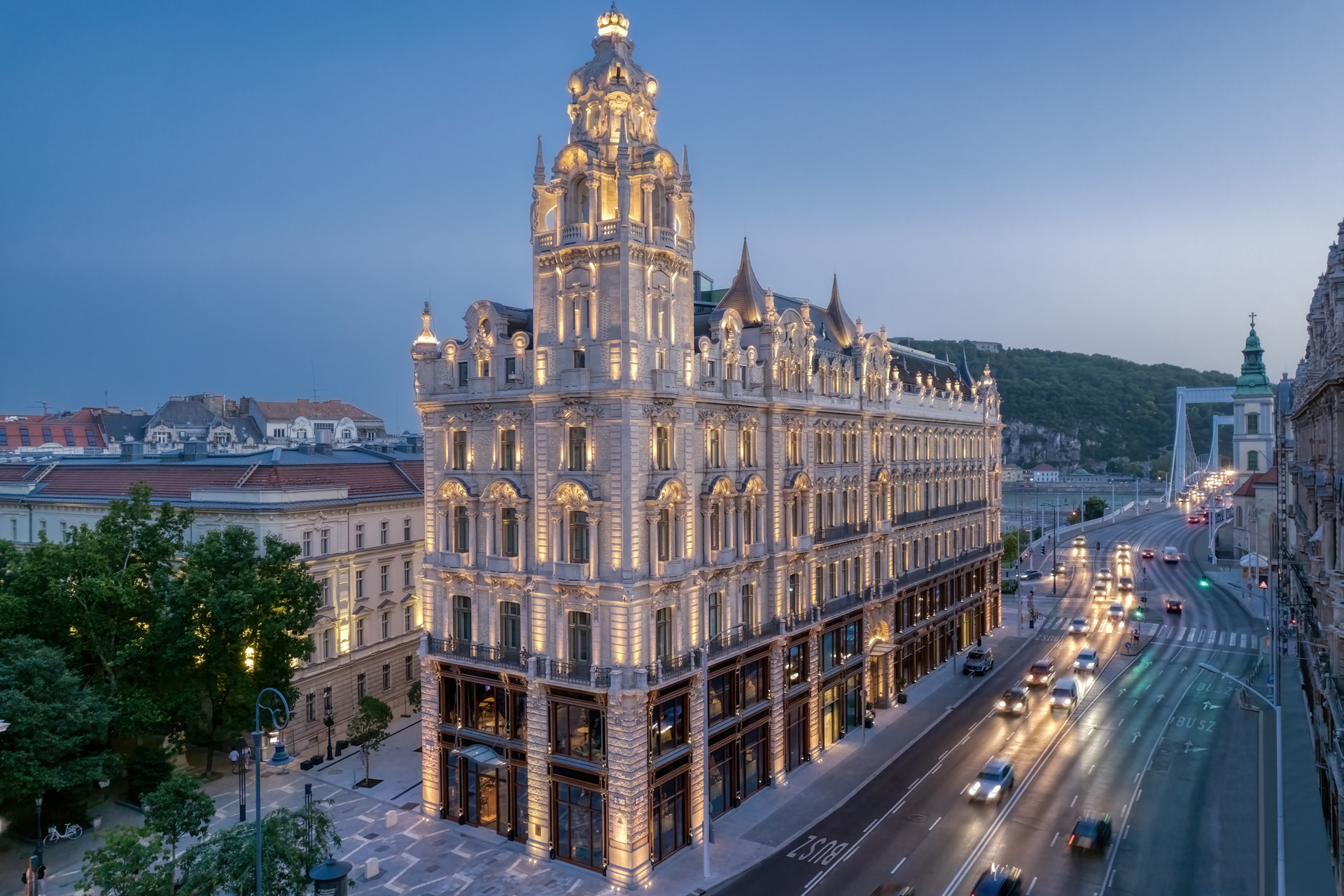 Originally commissioned by the Archduchess of Austria over 100 years ago, Matild Palace is a five-star hotel offering sophistication and heritage aplenty, today maintaining its magic in the heart of Budapest, says Felicity Carter.

Regarded as one of the most significant buildings in Budapest, the five-star Matild Palace stands proudly at the Elisabeth Bridge. Elegant and full of Hungarian charm, many of the guest rooms and suites, thanks to this position, offer enviable views of the city and its landmarks as well as the Danube river – a perfect place to soak up the culture of the city. 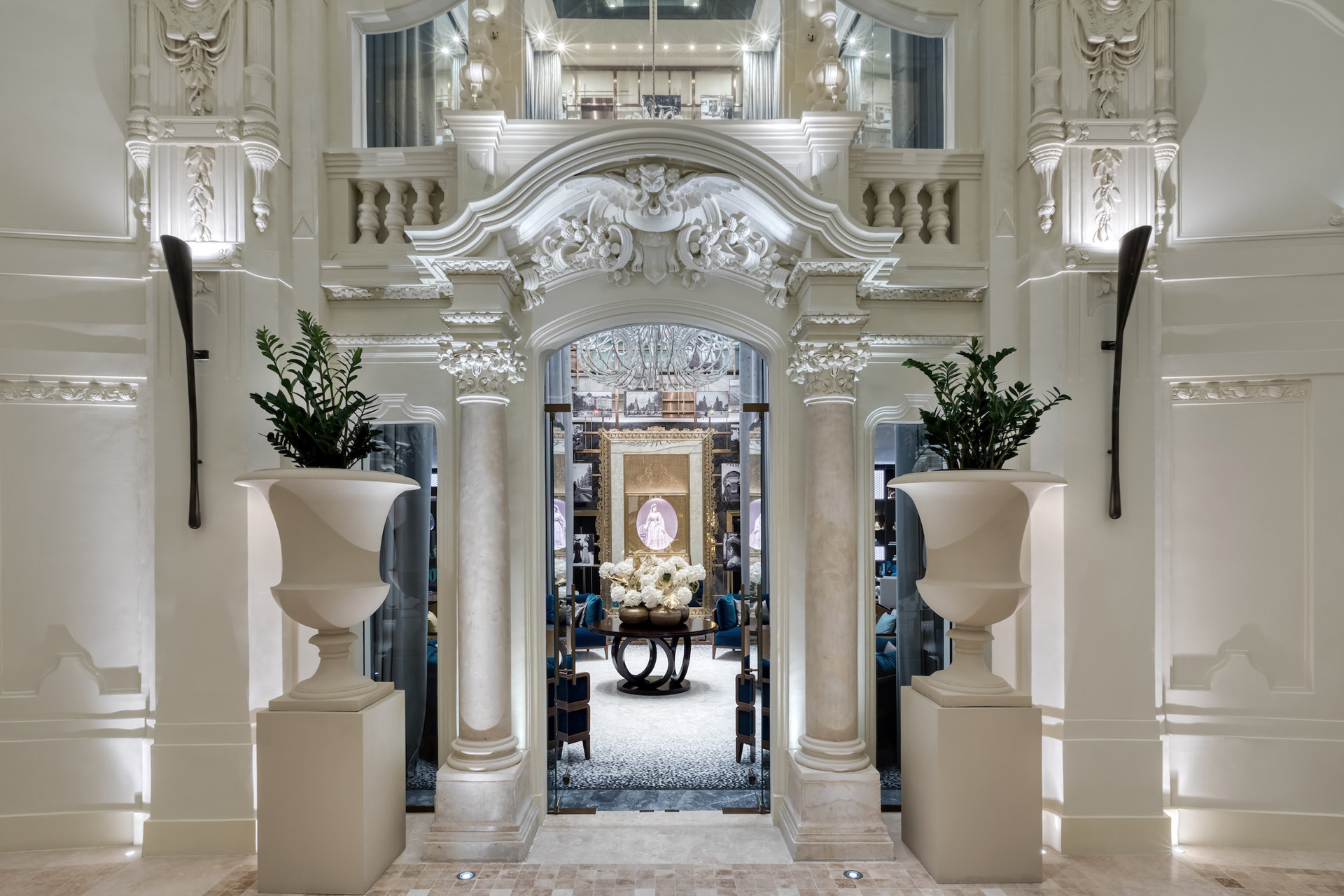 Rich in heritage, Matild Palace and its twin, Klotild Palace, were completed in 1902, commissioned by Her Imperial and Royal Highness Maria Klotild of Saxe-Coburg and Gotha with the intention of creating a social hub at the entry point of the city. Fast forward to 2021, Matild Palace opened as part of The Luxury Collection by Marriott, and as such has undergone an extensive refurbishment by MKV Design that balances all of that heritage and the Archduchess of Austria’s vision with the needs of the contemporary guest. As well as the lovely guest rooms, this includes a Hungarian-inspired Swan Spa, the elegant Spago restaurant, an atmospheric rooftop cocktail bar that overlooks the Danube, a cafe-meets-cabernet late night spot, and meeting rooms and event spaces.

There’s four types of bedroom inside, from elegant Guest Rooms to the Loft Room, to the Crown Tower Suite through to the ultra-luxurious namesake Maria Klotild Royal Suite. The Guest Rooms merge the contemporary with the Art Nouveau for a timeless aesthetic that offers all the modern-day conveniences. These rooms are sizable too, featuring high ceilings (over four metres) for a spacious feel. The highlight has to be the bathroom-meets-wet room with intricate turquoise tiles combined with slick white marble. It feels like a miniature hammam spa in your very own room. 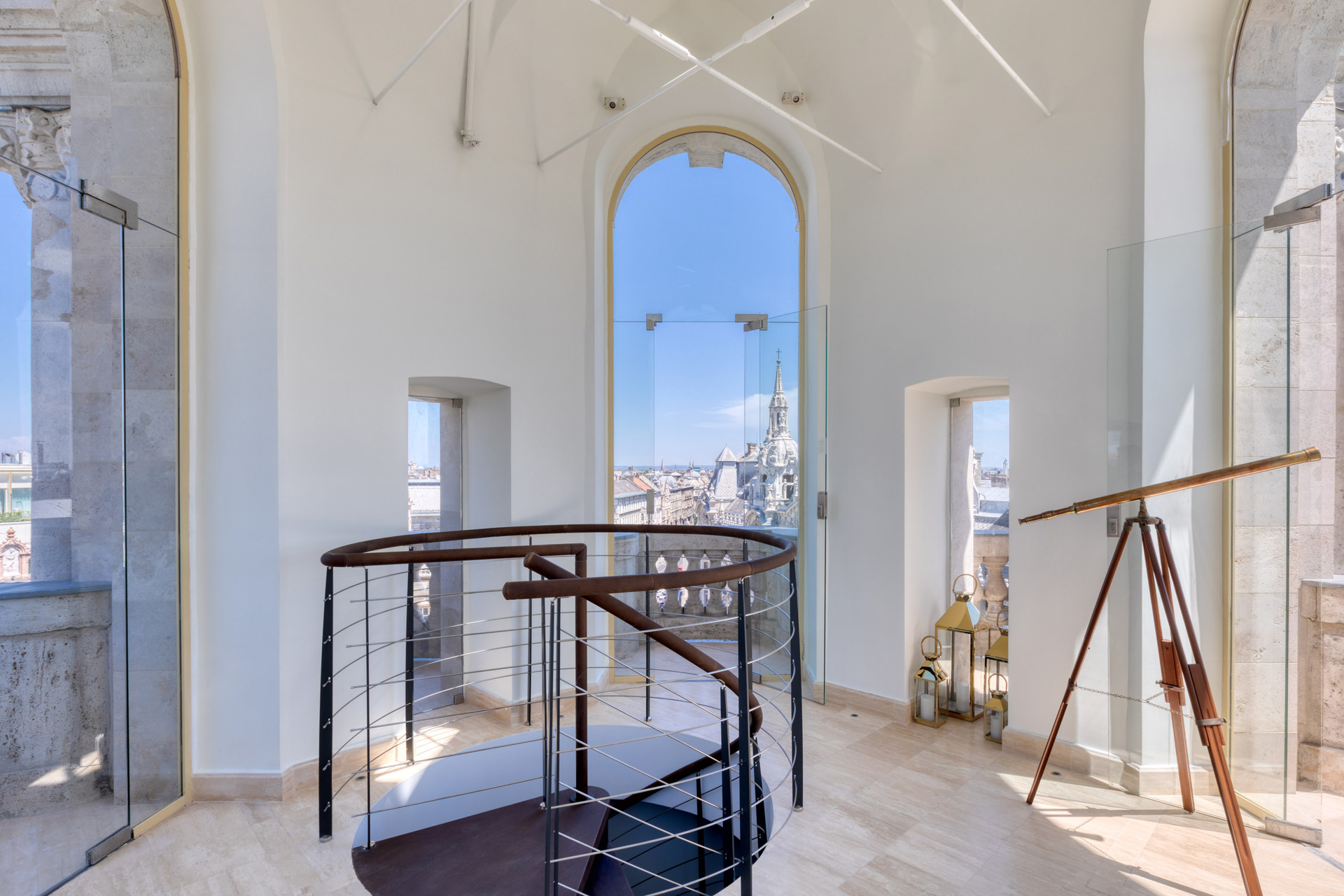 Situated at the top of the building is the king Loft Room, which provides enviable views of Budapest and, as the name suggests, has more of a modern loft feel with contemporary furniture and design touches. If decadent suites are more to your taste, there’s two types at the Matild Palace and both have the wow factor. On the fourth floor is the Crown Tower Suite, which actually spans three floors; again, expect signature high ceilings and Hungary’s first suite with a 48-metre-high tower offering 360-degree views of Budapest.

Or channel your inner HRH with the Maria Klotild Royal Suite. Found on the third level, the room consists of a living room, master bedroom, bathroom, and a separate study. For those wanting even more space, the suite can be connected to two other rooms to transform it into a three-bedroom apartment, ideal for longer stays or trips with family.

Within the hotel, the Swan Spa offers a chance to kick back and relax, thanks to its Hungarian-inspired bath experience and its ESPA treatment menu. Choose from signature facials, exfoliation scrubs, body wraps, and a list of massages (solo and couple). For those who want to hit the gym, it’s open 24/7 and is fitted with a range of equipment from cardiovascular to free weights. 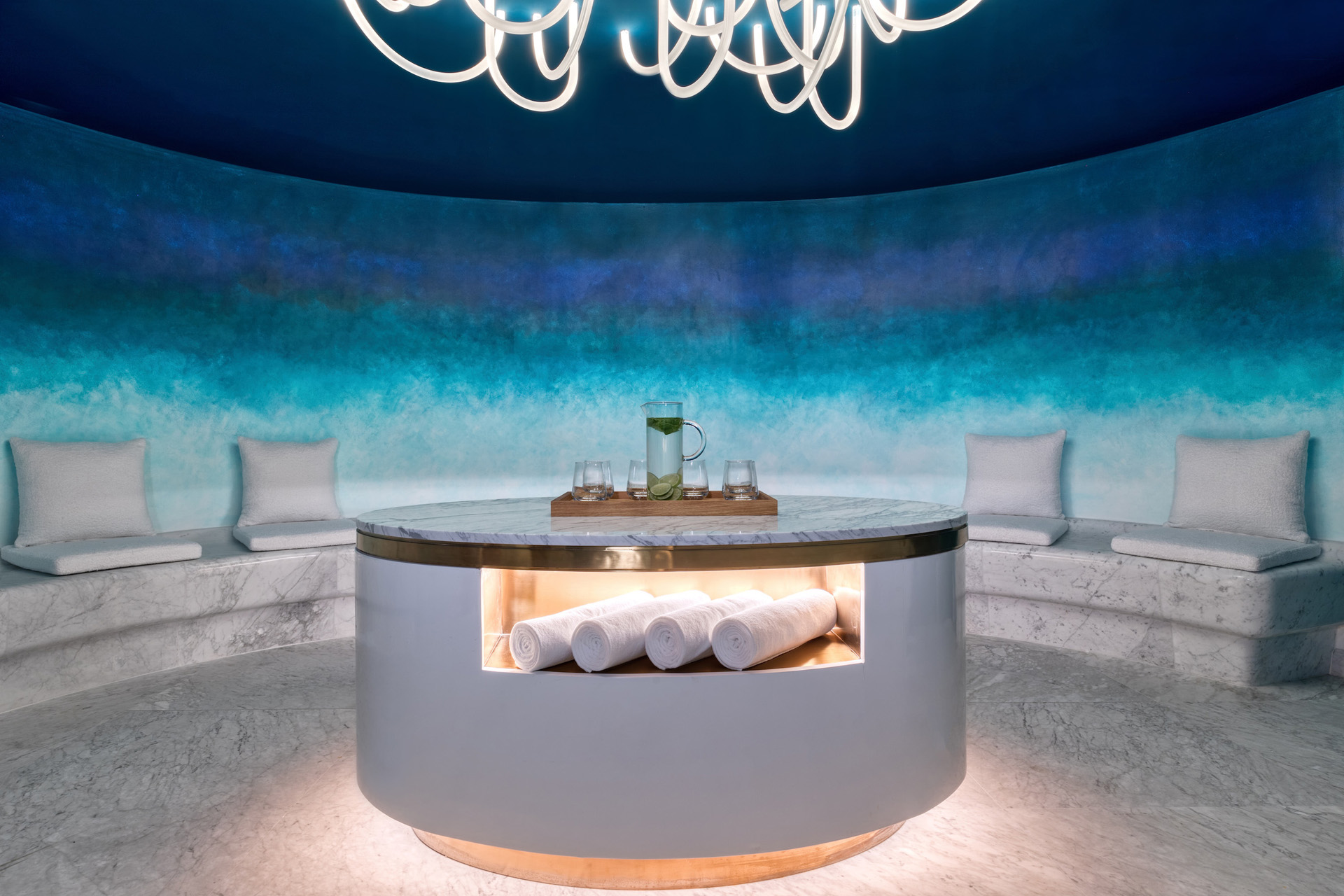 While outside, you’re just a stone’s throw from the Danube river, ideal for long strolls with landmarks along the way, including the Hungarian Parliament Building and Shoes on the Danube Bank. On the other side of the river, the Halászbástya (Fisherman’s Bastion) and the Lady On The Hill statue can be seen.

Matild Palace is also only a few minutes’ walk from the centre of the city, so there’s a mixture of traditional and high street shops, along with a whole host of bars and restaurants serving up local cuisine. For those who want to visit the world-famous Christmas markets, there is one only a five-minute walk away in the centre, and another one ten minutes away serving up mulled wine and local street food. Think Hungarian goulash in bread bowls, and tócsi (a type of large potato rosti served with sour cream, cheese and an array of toppings).

There’s plenty of options to keep you entertained at the Matild Palace, whether you’re wanting a buzzy cabaret, a candlelit dinner, or cocktails on the rooftop. The Matild Café & Cabaret dates back to 1901 and exudes the Belle Epoque era. Previously known as the Belvárosi Café, it attracted artists and writers such as Hungarian poet Gyula Krúdy. The look here nods to the past and is an ode to the city’s early 20th century café culture. Across two storeys, it oozes old school luxury, and is ideal for coffee and cake in the day while, at night, it is transformed into a cabaret destination. Cue the elevated stage (which was uncovered during the property’s excavation), which is at the heart of the space.

Everyone loves a secret sultry bar, and the Matild Palace has one in the form of The Duchess. A secret liquor library and rooftop garden, The Duchess is influenced by Marie Clotilde, who is thought to have requested a hidden rooftop bar in the original 1884 commission of the Palace. Sitting on top of the building, it offers stunning views of Budapest and is accessed through a discreet entrance via a golden lift that sets the tone for decadence and drama. Known for its range of experimental and playful cocktails, it’s an ideal sundown location for a tipple or two. 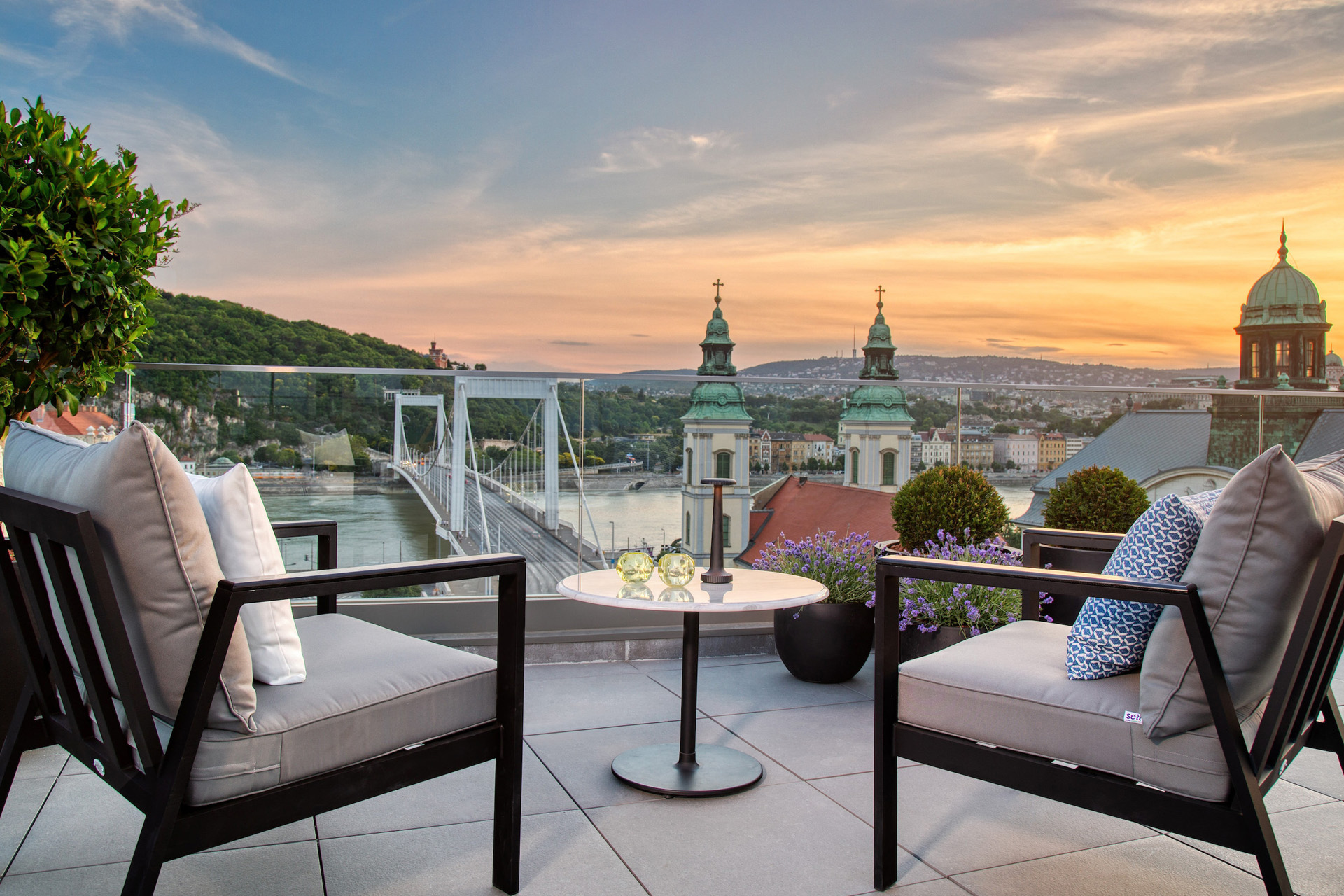 Austrian-American chef and restaurateur, Wolfgang Puck also has his 120-seat restaurant, Spago that, both in terms of the menu and the setting, is a real highlight. The European debut of Puck’s Beverly Hills eatery, it signifies his return home to Central Europe. Open for breakfast, lunch, and dinner under Executive Chef István Szántó and his team, the menu serves up local and international favourites, from gnocchi to schnitzel, making use of seasonal, local produce. There’s also a lively open-kitchen layout, and more dimly lit areas for more of a romantic atmosphere.

A UNESCO world heritage site, the Matild Palace offers a stay in an iconic and elegant Budapest landmark. Surrounded by history, take in the grand building and its ornate décor, and soak up the culture of this beautiful city.