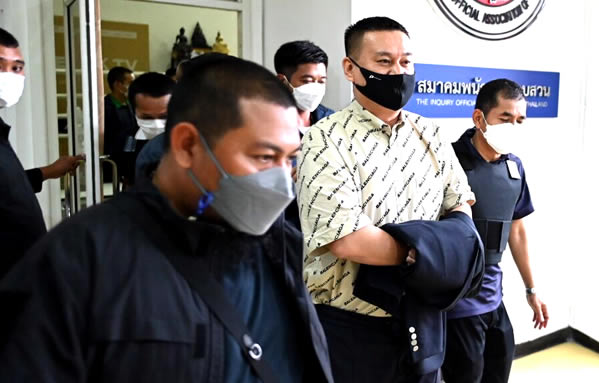 Before the court proceedings, on Wednesday, a frank and open press conference given by General Surachate Hakparn was attended by former Bangkok political and underworld boss in the past, Mr Chuvit Kamolvisit. Mr Chuvit, who has launched a personal crusade to expose the truth of this story, declared that he was satisfied that his work on the matter was now done. At the same time, despite his arrest on charges related to the sale of illicit narcotics, the Chinese kingpin at the centre of the saga still insists on his innocence and categorically denies any links to Chinese ‘grey’ or drug money.

On Thursday, General Surachate Hakparn, who is co-ordinating a wide-ranging police probe into Chinese mafia activities in Thailand, assured reporters that the wife of Mr Chaiyanat Kornchayanant, reportedly a senior police officer whose family have political connections, would be questioned about the arrest of her husband on serious charges in relation to the sale of illegal narcotics brought against him in court. Mr Chaiyanat, also known as Du Hao, was ordered to be detained for a further 12 days on Thursday when the Bangkok South Municipal Court refused a bail request from his lawyers on the basis that he was a serious flight risk. The arrest of the Chinese businessman now raises a political headache for the country’s ruling Palang Pracharat Party which in late October, through Minister of Justice Somsak Thepsutin, confirmed that it had received a ฿3 million donation from the businessman who has now been linked to serious criminal activities. The matter is currently before the Election Commission which is investigating a possible breach of Sections 74 and 75 of the organic law on political parties.

The Chinese kingpin or businessman linked to Chinese ‘grey money’ who was arrested by the Royal Thai Police on Thursday investigating an illegal nightclub and premises selling drugs in large quantities, has been denied bail before the Criminal Court in Bangkok.

On Thursday afternoon, the businessman who goes by the name ‘Du Hao’ or Mr Chaiyanat Kornchayanant and who has consistently refuted all allegations against him, was denied bail by the Bangkok South Municipal Court based on being a flight risk given the serious nature of police charges against him.

Police officers later escorted him to prison. It is reported that the suspect before the court was then transferred to the Central Correctional Institute for Drug Addicts.

Police before the court on Thursday had sought his detention for a further 12 days as their investigation into his activities continues.

General Surachate Hakparn who is believed to be coordinating a far-reaching investigation into Chinese criminal gangs and networks, is working with investigators at Yannawa Police Station which coordinated the raid by the Metropolitan Police Bureau on an exclusive nightclub for Chinese nationals in the Sathorn area of Bangkok in late October, an action that lifted the lid on the involvement of international Chinese criminal gangs and money in both Thailand’s underworld and in legitimate fronts including real estate investments.

A warrant had been issued for the arrest of Mr Chaiyanat by a court before he surrendered on Thursday after an application was made by police investigators working on the case linked to the October raid.

The raid saw hundreds of people arrested with a large number testing positive for drugs and large quantities of expensive drugs on sale from a warehouse situated within the expensive building complex.

Dozens of luxury cars including a Rolls Royce were seized in the raid during which millions of baht were found inside locked safes within the manager’s office.

Mr Chaiyanat has consistently denied any links to the club or illegal activities in Thailand.

On Thursday, in court, Mr Chaiyanat or ‘Du Hao’ was accompanied by a team of lawyers who sought their client’s temporary release on bail and offered the court a cash surety of up to ฿5 million.

The alleged gangster or mafia boss was pictured smiling throughout the last two days when he appeared before the media following his arrest and during court proceedings.

The court agreed with police who objected based on the nature of the case, including the potential penalty facing the accused if convicted, which meant the danger that the defendant may use the opportunity of temporary release to escape the jurisdiction was too high.

Police had testified that the quantity of illicit drugs seized in the raid in October linked to the charges brought on Wednesday was very substantial.

The charges presented to the court by police are based on drug-related offences related to the sale and distribution of illegal narcotics.

However, it is understood that the defendant has been linked by police working on a larger investigation into money laundering linked with Chinese triad gangs in Thailand who are believed to have moved into the country in force since the COVID-19 outbreak in 2020.

On Thursday, sources suggested that police leading the broader-based inquiry expect to have their case against Mr Chaiyanat finalised within a matter of weeks and are planning to summon the Chinese man’s wife, an as yet unnamed figure who is reported to be a police colonel, to answer questions that have been raised by investigators working on the case.

Sources indicate that police are satisfied that they have clear evidence against Mr ‘Du Hao’ or Chaiyanat Kornchayanant on the current charges levelled against him.

In recent weeks, General Surachate Hakparn, who is leading this probe, warned that given the influence and wealth of those at the heart of the investigation, police officers were moving carefully and with caution fearing that those involved will use the seemingly legitimate nature of some of these enterprises that may be linked to crime and their wealth to place legal hurdles as the police pursue the case.

Police will now move to seize the extensive asset portfolio of ‘Du Hao’ of Mr Chaiyanat Kornchayanant, many of which are reportedly held by nominees

At the same time, General Surachate vowed that arrest warrants will be issued against all those involved including key drug kingpins, Chinese nationals and, in particular, Thai nationals who have facilitated such gangs by acting as nominees to conceal the wealth of various kingpins from authorities.

On Thursday, amid the latest developments, General Surachate also known in Thailand as ‘Big Joke’ made it clear that investigators would now seek to have the assets of ‘Du Hao’ or Mr Chaiyanat Kornchayanant seized.

After police moved against the reputed billionaire who is thought to have transferred billions in assets into the name of family relatives in recent days, they raided a ฿200 million mansion on Bangkok’s Rama V road and a luxury hotel in the capital reported to have been used extensively by Mr Chaiyanat.

The raids followed the delivery of what is thought to have been accurate information supplied to the Minister of Justice and the Department of Special Investigation (DSI) by the famed one-time gangster and former massage parlour boss Chuvit Kamolvisit who has also had a career as a popular Bangkok politician.

In recent years, after serving a prison sentence and turning to higher education, Mr Chuvit has become an activist for positive change in Thailand.

The arrest of Mr Chaiyanat and his appearance before the courts may create a particular problem for the ruling Palang Pracharat Party which has been linked to a donation from the Chinese businessman, a fact confirmed upfront in October, by the Minister of Justice Somsak Thepsutin who also published recorded details of the donation as it was recorded by the party, as required by law.

The sum donated was ฿3 million.

Afterwards, the Palang Pracharat Party said it was investigating the matter and that Mr Chaiyanat was not particularly well known to the party but may have donated the money because he supported the party’s policies.

This led to constitutional activist Srisuwan Janya, the leader of the Association for the Protection of the Thai Constitution (APTC), lodging a petition to the Election Commission to have the Palang Pracharat Party investigated under Section 74 and Section 75 of the organic law on political parties for accepting funds from a foreigner or accepting money that may be linked to criminal activities.

There are also unconfirmed reports of links between the Chinese businessman and other political figures, some of whom have served previously at a cabinet level.

It is also reported that the wife of Mr Chaiyanat has political links as she works as a senior police officer within the foreign affairs sub-division and is the niece of a former police chief and deputy prime minister.

On Thursday, General Surachate Hakparn emphasised that speculation on this, at this time, was premature and that police must follow the trail of evidence methodically.

He said it was not necessary to explore this matter at this stage of the investigation.

Big Joke emphasises that the investigation must be pursued methodically and that everyone, including police officers, will be held fairly accountable

The top police officer pointed out to reporters that disciplinary action had already been taken against several police officers stationed at Yannawa and Lat Phrao Police Stations concerning the case.

Police General Surachate was questioned by journalists on reports circulating that a senior officer within the Metropolitan Police Bureau had demanded money for the return of one of the luxury cars seized in the raid on October 26th last.

He suggested that an investigation was underway into the officer in question and that he had been asked to respond to the claims which may involve an offence under Section 157 of the Criminal Code for dereliction of duty.

With regard to the police colonel who is Mr Chaiyanat’s wife, he said that she will be questioned vigorously on any possible connections to her husband’s illegal activities.

He assured reporters senior police authorities would have no compunction in taking action against her if it turns out that she has in any way been complicit in these matters.

At the press conference given by General Surachate Hakparn, Mr Chuvit Kamolvisit handed over ancillary documentation information about Mr Chaiyanat and also made a statement.

On Wednesday and Thursday, Mr Chaiyanat repeatedly insisted to police that his business activities in Thailand were legitimate despite the evidence unearthed by police and the criminal charges he is facing.

The wealthy Chinese man has repeatedly denied any links with the high-end drug club in Sathorn raided by the Metropolitan Police Bureau on October 26th and claims to be a businessman involved in the tourism and hospitality industry.

Amongst the information supplied by Mr Chuvit to the police on Thursday was a full inventory of Mr Chaiyanat’s stated ฿2 billion fortune with a copy of the title deed to 106 rai of land in central Bangkok which is the subject of a ฿1.6 billion mortgage and involved a Thai nominee.

Mr Chuvit’s information was that the woman named as a nominee had an address listed as a rented room in Ratchadaphisek.

After the press conference, the former politician and underworld boss told reporters that he was satisfied his work on this particular mission was now done and would be taken forward by the Royal Thai Police and lawful authorities.