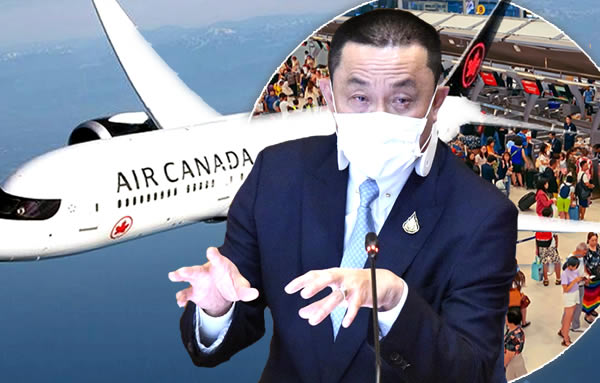 Direct 13-hour flight from Vancouver to Bangkok is a first for Air Canada and Thailand which is trying to regain its position as a power travel hub in Southeast Asia after the kingdom was hit hard by the sudden closure of its air space caused by the pandemic and the unpredictable nature of its reopening process while big airlines prioritise more profitable hubs such as Singapore.

Air Canada became the first international airline to fly non-stop from North America this week when it launched its Vancouver to Bangkok service which promises to open up a new and badly needed gateway to travellers moving between Canada, the United States and Thailand. It comes as Thailand notched up 1.89 million arrivals in November, up nearly 16% on October and a full 159.94% more than the average this year as the foreign tourism industry finds its feet again for the high season.

On Thursday, Air Canada inaugurated its first flight from Vancouver to Bangkok in what has been hailed as the first nonstop flight connection between North America and Southeast Asia.

The 13-hour flight could not be coming at a better time for Thailand’s foreign tourism industry right in the middle of its high season and in a year when the critical industry, which generates 20% of all Thai employment, has been dogged by a lack of flight connectivity as regular large airlines flying into Bangkok from western countries in particular, have been slow to ramp up the flight frequencies to anything like the numbers seen in 2019.

Recently, the Tourism Authority of Thailand (TAT) estimated that current flight connectivity is at 40% of what it was before the pandemic which has seen an average fare hike of 40%.

Thailand dramatically and overnight closed its airspace in April 2020 to international flights and was later cautious and unpredictable in reopening for business.

This was due to the government’s policy of prioritising public health supported by strong public opinion on the matter linked with the country’s culture and politics despite the economic imperative.

In the meantime, larger international airlines, driven by higher costs, a shortage of manpower and resources, are prioritising more lucrative routes with higher numbers of business class passengers thereby favouring destinations such as Singapore and Sydney, Australia.

The return fare from Vancouver to Bangkok is approximately $1,650 with flights from Bangkok to Vancouver also available four days a week to the Canadian hub where flyers to the United States can obtain flight clearance and then travel via Air Canada to Los Angeles, New York and 51 other US destinations.

The new flight service will run provisionally from December 1st to March 26th 2023 and was given a warm welcome by Mr Jeff Nankivel of the Asia Pacific Foundation of Canada who saw the new service as a reflection of his country’s new Indo-Pacific strategy.

‘We stand ready to support Air Canada as our national airline embarks on international service on the route straight from Vancouver to Bangkok which only one airline operates on direct flights between North America, Southeast Asia and Thailand. It comes at the same time as the Canadian government has launched a new Indo-Pacific strategy. This strives to increase engagement with the people and the growing Southeast Asian economy and will play a key role in Canada’s plans. That will help elevate the competitiveness of the region for the next decade.’

‘This new flight marks another milestone in Air Canada’s commitment. Bangkok is an important aviation hub in the region which now welcomes future flights from North America’ he stated.

The new flight service comes as Thailand’s inbound travellers’ figure for November increased by 159.94% when compared to an average over the previous ten months with 1,895,096 being welcomed of which 96.84% arrived by air with Suvarnabhumi Airport accounting for 72% of the total, Don Muang Airport with 13% and regional airports such as Phuket International Airport accounting for 15%.

These figures were released on Saturday by Minister of Transport Saksayam Chidchob.

Even as the baht surges, Thailand faces economic recession in mid-2023 with lower earnings

The numbers arriving in the kingdom in November were 15.86% higher than in October which is to be expected as the Christmas and New Years’ holidays, the peak of the high season approaches.

Thailand has received 9.4 million visitors to the end of November and now appears on target to substantially beat its target this year of 10 million arrivals although the figure is likely to be only 33% of that seen in 2019 with lower spending this year, down by 12% on 2019’s figure at ฿44,000 a head.

This is because of larger numbers arriving from Asian points of origin and less long-haul visitors or higher spenders.

An interesting feature of November’s arrivals was that the second most popular mode of entry into the kingdom was by water with a 504.69% increase in such visitors with 71,118 arriving by ship, boat or yacht.

This was followed by 42,683 travellers entering Thailand by road and 16,091 arrivals by train.