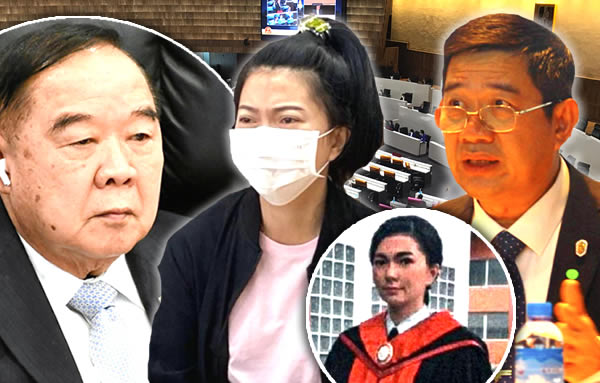 A House committee chaired by former Police Commissioner and Thai Liberal Party leader General Sereepisuth Temeeyaves is to probe the facts which point towards corruption, over the appointment of Police Corporal Kornsasi Buayaem to the Royal Thai Police Special Branch division in 2017. It has also emerged that the currently jailed police officer served as an adviser to the legal affairs committee of the junta-era National Legislative Assembly (NLA) chaired by the acting PM’s younger brother Admiral Sitthawat Wongsuwon.

Two brothers of acting Prime Minister Prawit Wongsuwan are to be called before a House of Representatives committee investigating irregularities in the appointment of Police Corporal Kornsasi Buayaem to the Royal Thai Police Special Branch while over age and without qualifications. The 43-year-old Thai policewoman has been charged with assault and human trafficking in connection with the alleged enslavement of her maid in Ratchaburi province. It comes as Thai Senator Thani Onlahiad has come forward and acknowledged that he had a relationship with the policewoman some time ago but has vehemently denied abusing his position or acting with impropriety.

A 69-year-old Thai senator has come forward to clarify that he, at one point, was involved in a relationship with a police officer who has been charged with assault and human trafficking offences in relation to the alleged enslavement of a maid and former army officer at her home in Ratchaburi which came to light in August after a national TV show exposé.

Senator Thani Onlahiad said his relationship with 43 year old Police Corporal Kornsasi Buayaem was a close one but had ended some time ago and that the pair had become distant from each other.

First he knew of the scandal from media reports like everyone else, also refutes Red Bull controversy

He told reporters that the first he knew about the scandal was from news media reports in which he also noted that the accused had formed a new relationship which has also become embroiled in a complex police investigation linked to a second police officer dismissed from the police force earlier this year, in February.

The senator’s story has also been linked over the last 48 hours with the controversial and ongoing ‘Boss’ Yoravuth case in Thailand where the scion of Thailand’s powerful family controlling the Red Bull fortune fled the country in 2017 after being charged in connection with the death of an on-duty policeman in September 2012.

The member of Thailand’s upper house of parliament is a former member of the National Legislative Assembly, the rubber-stamp national parliament appointed during the period in power of the former junta, the National Council for Peace and Order (NCPO) from 2014 to 2019.

The unicameral house with 250 members consisted mostly of police and security officers as well as volunteers and 70 independent appointees.

It has emerged in recent days that Police Corporal Kornsasi, the policewoman at the centre of this growing scandal, was appointed as an honorary adviser to a National Legislative Assembly committee on legal affairs chaired by Admiral Sitthawat Wongsuwan and on which Police General Patcharawat Wongsuwon was a member concerning a specific issue or matter.

Members of the former National Legislative Assembly were not paid a salary as many were already employed by the state and were prohibited from receiving secondary incomes but they did receive both a ‘position allowance’ and ‘extra allowance’ of ฿113,560 per month for their participation.

On Tuesday, speaking with reporters and while denying any wrongdoing concerning his previous relationship with the police officer who is now the subject of a range of investigations including a criminal probe which saw her jailed on August 22nd by Ratchaburi Central Prison after bail was refused to the accused, Senator Thani also raised the Red Bull controversy.

He insisted that he had not abused his position as both a senator and member of the National Legislative Assembly in relation to enquiries as to how Police Corporal Kornsasi obtained her position within the police special branch force without a proper degree and while being overage.

He suggested that the agencies responsible for recruiting the now-suspended police officer can answer these questions to the appropriate authorities investigating what had transpired.

The senator insisted he would await the findings of the National Anti-Corruption Commission on the matter and accept the outcome of its investigation.

Senator Thani referred at length to the National Anti-Corruption Commission which has confirmed that it has received several complaints related to what it described as an unnamed senator while also not releasing the names of the complainants.

He urged the media to respect proper boundaries and not to make the situation worse.

He warned that his team would monitor all coverage of the story in all publications with a view to further action if required.

On Tuesday, Mr Niwatchai Kasemmongkol, the Secretary-general of the commission outlined the procedure that must be followed concerning the information now being placed before it.

Mr Niwatchai insisted that no senator at this point has been named by the reports it has received in relation to the appointment of Police Corporal Kornsasi Buayaem or related to other irregularities about her appointment as a staff officer with Thailand’s Special Branch division of the Royal Thai Police in 2017.

The initial police investigation in Ratchaburi, led by Assistant National Police Commissioner Surachate Hakparn or ‘Big Joke’ into the criminal charges against Police Corporal Kornsasi in Ratchaburi after her surrender at Ratchaburi Police Station on August 20th last, identified that she had been admitted to the service at 38 years of age when the maximum age was 35 years and did not possess a degree except for a vocational certificate in accounting.

National Police Commissioner Suwat Jang­yod­suk had dispatched ‘Big Joke’ to coordinate and take control of the investigation given the disturbing questions raised by the case and avid public interest.

During interrogation by Thailand’s top cop, Police Lieutenant General Surachate, the policewoman admitted she obtained her job as a police officer in 2017 through the intercession of a ‘Phu Yai’ meaning a senior figure with influence.

On August 26th last, Police Major General Udon Wongchuen, the commander of the 1st Division of the Special Branch Bureau, signed an order suspending Police Corporal Kornsasi from duty pending the outcome of a disciplinary investigation into her activities and the criminal case being prosecuted against her.

Lately, there was some suggestion that the policewoman had obtained a university degree in 2018 but this has also now been refuted with questions raised about a photograph distributed of the police officer in a university gown this week.

On Tuesday, Assistant Professor Attaphol Usaiphan, Vice President for Academic Affairs at ChomBueng Rajabhat University confirmed that Police Corporal Kornsasi Buayaem had enrolled at the university but did not complete her studies at the institution in political science and other disciplines nor did she obtain a degree because of poor academic performance and was dismissed from the rolls in 2018.

He did confirm that a photo of Police Corporal Kornsasi in a university gown appeared to show an authentic gown but not one associated with his university.

Acting PM’s brothers and senator, a relationship partner of the policewoman, among 20 to be called as witnesses including the abuse victim an ex-soldier

On Tuesday, it was confirmed that the House of Representatives committee on corruption and misconduct is to call on two brothers of the Acting Prime Minister Prawit Wongsuwan, Admiral Sitthawat Wongsuwon and Police General Patcharawat Wongsuwon as well as Senator Thani Onlaied to appear before it to probe the appointment of Police Corporal Kornsasi to her police officer role and other state positions.

Admiral Sitthawat Wongsuwon is currently also a sitting senator having been appointed by the junta in May 2019 to the upper house of the new National Legislative Assembly under the 2017 Constitution.

He was chairman of a key legal affairs committee in 2017 which was then approached by lawyers acting for Red Bull scion Vorayuth Yoovidhya or ‘Boss’ seeking assistance.

Acting Prime Minister, in 2020, dismissed any connection between his family and Red Bull scandal

In July 2020, acting Prime Minister Prawit Wongsuwan firmly rejected any claims of impropriety by his family in that matter.

‘My family has never known the family,’ General Prawit said. ‘Personally, I have never known him.’

An explosive report on state corruption associated with the Red Bull scandal, prepared by former Anti-Corruption Commission Chairman, Vicha Mahakun was delivered to the Prime Minister’s Office in August 2020.

Mr Vorayuth continues to evade justice with one charge that expired this year and the main charge related to the death of 47-year-old Police Sergeant Wichian Klanprasert due to expire in April 2027 if he is not arrested and brought before a Thai court before then.

The intention of the House of Representatives committee to look at the charges of corruption linked with Police Corporal Kornsasi Buayaem was confirmed by Move Forward Party MP Teerajchai Phunthumas, a spokesman for the panel chaired by Police General Sereepisuth Temeeyaves, a former police commissioner and leader of the Thai Liberal Party.

Mr Teerajchai revealed that the maid, the victim in the criminal case being pursued by Ratchaburi police, will also appear before the committee along with approximately 20 other witnesses.

Question for the house committee is how did Police Corporal Kornsasi, by her own admission, corruptly become a Special Branch police officer in 2017

The key question before the committee will be to establish how Ms Kornsasi was recruited by the General Staff Division of the Special Branch Bureau of the Royal Thai Police in 2017 while she was overage and did not have appropriate educational qualifications.

The committee will also examine how she was appointed to temporary duties within Internal Security Operations Command (ISOC) Region 4 at the beginning of 2022 for which extra pay allowances were due.

A preliminary inquiry this week showed no record of her working within that organisation.

Earlier this week, now-suspended Prime Minister Prayut Chan ocha and in his role as Minister of Defence, urged the military to cooperate fully and transparently with any inquiry into this matter which runs the risk of undermining public trust and confidence.