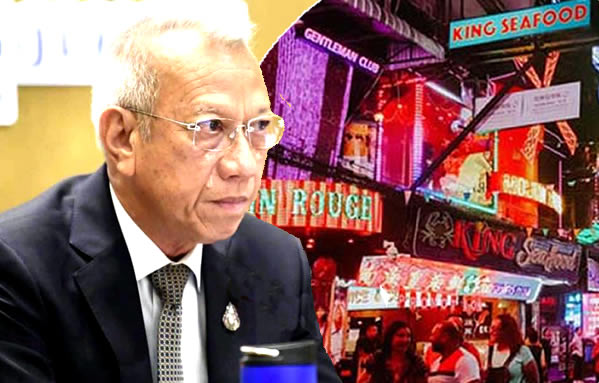 Pilot study on the Bangla Road in Phuket carried out by the Ministry of Tourism and Sports shows that 2 am to 3 am is the most profitable period for nightlife venues with foreign tourists only leaving their hotels at 11 pm. Minister Phiphat said it is important to bring all nightlife venues under the supervision of authorities as illegal establishments pose a risk.

Tourism Minister Phiphat Ratchakitprakarn is still pushing his plan for 4 am closing hours for the country’s top nightlife strips which is to come before the cabinet on November 15th next. Even if approved in principle there will still have to be public hearings and consultations. On Thursday, the minister said the plan was about making sure nightlife venues were supervised and regulated while conforming to the behavioural patterns of foreign tourists in Thailand’s popular nightlife hotspots. It comes as Tourism Authority of Thailand (TAT) boss Yuthasak Supasorn has unveiled a partnership deal with Korean Air and Delta Airlines along with 50 US travel agents aimed at bringing up to 1 million American and Canadian tourists to Thailand in the coming year. The development comes as it is increasingly clear that the recovery of Thailand’s foreign tourism industry is being impaired by reduced flight connectivity, especially with North America.

Minister of Tourism and Sports Phiphat Ratchakitprakarn said on Thursday that he will present a proposal to the cabinet on November 15th next to agree to extend opening hours for night clubs in key tourist hotspots around the country notably in Bangkok, Pattaya, Bangla Road in Phuket, Phang-nga and Krabi until 4 am as well as Ko Samui in Surat Thani.

The current closing time is 2 am.

The minister’s proposals will extend to three nightlife areas in Bangkok including Soi Cowboy, Patong and Khao San Road.

Minister Phiphat said he plans to facilitate the behavioural patterns of foreign tourists on holidays when it comes to access to Thailand’s famed nightlife areas and in doing so, increase revenue into the economy while also attracting more travellers to the kingdom wanting to party.

He said the permanent secretary at his ministry is currently preparing information for submission to the cabinet which he hopes will result in an agreement in principle for the proposal.

Even if the green light is forthcoming on November 15th, it will still be necessary to conduct public hearings on the plan with several activist groups already coming out vociferously against extended nightlife hours.

Opposition is particularly strong among those in Thailand adamantly opposed to alcohol consumption.

The minister said it must be recognised that many entertainment establishments are already open well beyond the current closing time and that there were also many illegal venues which are not being regulated or supervised.

These may pose a risk to the public in particular concerning potential fire hazards.

He felt that more liberal regulation would help to allow authorities to set standards and supervise the nightlife sector, making it safer for the public.

At the public hearing, interested parties and people will be able to question key executives and officials involved in the extension of opening hours in their areas.

He also said that his ministry remained determined that his proposal should only be implemented by agreement with local communities.

He revealed that research carried out by his ministry with a pilot in the popular Bangla Road nightlife district of Phuket, had shown that from 2 am to 3 am each morning was the highest earning period for nightlife venues who took in ฿78 million during this hour’s trading.

The findings of the pilot study found that foreign tourists taking part in nightlife activities only left their hotel at 11 pm with comparatively little being spent between 11 pm and midnight compared to between 1 am and 4 am.

The study estimated that operators under normal hours are losing ฿70 million a day and that the limits being put on nightlife activities in well know centres were also feeding into less demand to visit Thailand with the kingdom’s nightlife being a key attraction of Thailand as a tourist destination with Bangkok, Pattaya and Phuket acknowledged worldwide for their vibrant and colourful nocturnal activities.

The minister is immediately seeking an extension to a 4 am closing time for the nightlife sector in selected areas popular to foreign tourists for the November to March period.

The push to boost income for foreign tourism comes as Thailand is struggling to reach GDP growth this year of 3.4% to 3.5% with foreign tourism being the key driver of economic growth in the latter months of the year.

There are also, despite rising numbers at the airports over the past week, disturbing signs that all is not right with the kingdom’s foreign tourism sector as it struggles to achieve the same level of recovery as its neighbours in Asia.

The prospects for the industry which has been suffering this year with a lack of long-haul visitors because of flight connectivity issues, received a boost on Friday when the Tourism Authority of Thailand (TAT) revealed that a key business-to-business series of meetings held in Bangkok in the last few days, had resulted in a breakthrough with 50 top travel agents in the United States pledging to bring in up to 1 million US and Canadian tourists to the kingdom over the coming year.

New partnership with Delta Airlines, Korean Air together with 50 US travel agents seeks to attract 1 million US and Canadian visitors in the next year

This deal is supported by a partnership between Korean Air and Delta Airlines to connect 17 US cities to Thailand. It will offer American holidaymakers and Canadians access to the kingdom.

On Thursday, Tourism Authority of Thailand (TAT) boss Yuthasak Supasorn acknowledged the flight connectivity problem by pointing out that Thailand does not have a flag carrier operating flights between the United States and the kingdom as before with Thai Airways, since its bankruptcy and restructuring plan, now focused on routes linking Europe with Thailand, as he met key representatives of Koran Air and Delta.

‘Americans, in general, have a strong desire to come to Asia,’ declared Mr Akinori Yokosawa, a regional promotions manager for Delta Air Lines.

He revealed that flight costs to Asia were currently 30% higher than in 2019 but his airline was achieving a load factor of up 95%.

He said the market for leisure travellers had recovered to 75% of 2019 levels.

The figure highlights the particular headwinds and problems that are impairing Thailand’s foreign tourism recovery this year as the kingdom is only forecast to see a potential return to 25% of 2019 visitors with most of them being short-term travellers from Asia.

Mr Yokosawa revealed that 5 of the 17 Delta flights linking South Korea with the United States had connecting flights to Bangkok.

The airline executive said the stronger US dollar was leading US visitors to stay for longer periods of up to 10 days at a time, in Asian destinations.

Thailand has seen 225,909 US travellers visiting the kingdom from July 1st to September 30th this year alongside 39,950 from Canada.

One of the travel agents attending the Tourism Authority of Thailand (TAT) event in Bangkok was Ms Melissa Barkalow of World Travel Service.

She said that, currently, 95% of her US travellers were flying to Europe on holidays.

The American travel agent was considering pitching an 8 days holiday to Thailand to her clients based on an 8-day trip costing $10,000.