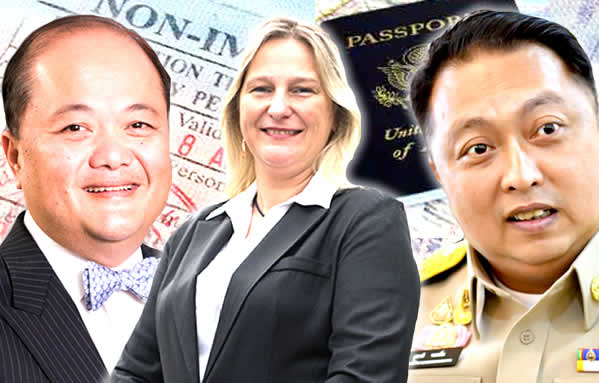 The new 10 year Long Term Visa which became open to applications on Thursday, September 1st, is expected to help generate up to 5% of GDP by 2027 while making the economy more dynamic as the move addresses the need for skilled professionals, entrepreneurs and investment while offering global citizens a new low cost of living lifestyle and lower taxes.

Foreign business leaders in Thailand are welcoming the country’s new 10-year Long Term Visa programme aimed at wealthier and highly skilled foreigners which went live on September 1st and is being coordinated by the Board of Investment. The final details of the scheme are both practical and offer significant benefits to global citizens taking up the offer such as a flat income tax rate of 17% and tax exemption on all offshore income. The move is expected also to generate up to ฿1 trillion per annum for the kingdom by 2027 and help transform the country’s economy.

The Chairman of the Joint Foreign Chambers of Commerce in Thailand Ms Vibeke Lyssand Leirvag has welcomed the new 10 year Long Term Visa which Thailand began offering from September 1st through the country’s Board of Investment aimed at wealthy and skilled foreigners who wish to live and work in Thailand.

The Norwegian woman, who is also a businesswoman, has been living and working in Thailand since 1989.

She praised the radical move, one which addresses an ongoing issue for foreign executives and business entrepreneurs who have always been a key pillar of the Thai economy, something that is due to expand further under this significant initiative by the government.

10-year visa programme approved by the cabinet this year with the processing fee reduced from ฿100k to ฿50k to show it meant business, is now live

The Long Term Visa programme was approved by the Thai cabinet earlier this year and first revealed in April 2021 by a committee advised by Mr Chayotid Kridakon, a former managing director of JP Morgan Thailand in an initiative supported by Deputy Prime Minister Supattanapong Punmeechaow which is part of a wider plan to attract diversified foreign talent and investments into the country to spur economic growth and also make the kingdom’s economy more dynamic.

‘Work permits and visas have been the biggest obstacle for all investors in Thailand for over a decade and LTR offers a solution,’ said Ms Lyssand Leirvag this week after the board of Investment and Minister of Labour Suchart Chomklin confirmed that applications were now being accepted after it was announced three months previously on Thailand’s official record, the Royal Gazette.

She said the new visa regime would make Thailand an attractive proposition for global citizens seeking to buy a home in the kingdom and use it as a work base.

Earlier this year, the Thai government showed that it meant business concerning the initiative when it slashed the proposed processing fee for the 10-year visa from ฿100,000 to ฿50,000.

The cabinet also approved a plan in principle for foreigners who are holders of the new long-term visas to be allowed purchase property limited to one rai or approximately 0.4 acres or 0.16 hectares, strictly for residential purposes.

However, due to the sensitive political nature of the move or anything to do with land ownership by foreigners in Thailand, this proposal is still being reviewed although it is expected to come into effect but subject to strict limitations to avoid abuse and allay domestic concerns.

The final details of the long-term visa unveiled this week by the Board of Investment are surprisingly practical with a streamlined application system for the visa where all documentation is verified before being submitted with a decision on any application to be issued within 20 days.

Practical nature of his scheme is noteworthy

The practical nature of the visa regime means that those who are granted the visa can begin to work in Thailand immediately while later picking up and finalising the work permit for the duration of the visa.

Work permits will also be issued in digital format from an appointed visa office in central Bangkok which will become the single point of contact for processing details to do with the special visa category.

The 10-year visa itself is divided into a 5-year visa on approval with an extension permitted for a further 5 years.

However, the 10-year visas itself can also be renewed.

The first group targeted by the visa programme are wealthy foreigners of any age who have assets over $1 million and who have invested $500,000 in Thailand either through government bonds, investments or holdings in the kingdom.

A further condition for such applications will be to show an income over the previous two years of not less than $80,000 a year.

A variation of this category exists for wealthy pensioners seeking a 10-year long-term visa.

For this, the requirement is that the applicant must be over 50 years of age and also present an income of over $80,000 per year.

Where the income is lower than $80,000 but not below $40,000 per year, the applicant must show evidence of $250,000 invested in Thailand either through government bonds, property holdings or other investments.

The third category of ‘high potential’ foreigners suitable for the new long-term visa is highly skilled and valuable professionals who chose to live and work from Thailand.

These applicants must be employed in a business activity targeted by the government such as science, technology or targeted areas for growth for the economy such as digital transformation.

Applicants must show a present income of $80,000 per annum over the last two years.

However, if the income is lower than $80,000 but not less than $40,000 then the applicant must hold a Masters Degree level education in the approved field of employment or be the owner of intellectual property rights which have been associated with a public funding exercise.

A further condition of this third group is that they must be employed by a public company quoted on a recognised stock exchange or if it is a private firm, it must have a turnover of not less than $150 million over the last three years.

The applicant must also demonstrate 5 years of experience in the targeted field of economic activity over the past 10 years of their working life.

There are also more relaxed terms for talented individuals contracted by Thai government agencies or Thai institutions engaged in higher education with no minimum income threshold, education and work experience requirements for such applicants.

All applicants applying for a Long Term Visa must show medical health coverage or social security health benefits covering up to $50,000 or else show $100,000 on deposit.

The benefits of the Long Term Visa are extensive.

Starting with rapid processing at Thai airports on arrival to only having to report an address in Thailand to the Immigration Bureau once a year as opposed to every 90 days for other visa holders under the 1979 Immigration Act.

The holder of the visa is also exempted from the strict visa rule in Thailand which demands that any foreigner with a work-related visa engaged in work must be employed along with 4 Thai nationals by the same firm or organisation.

There is also the ability to leave and reenter the country without requiring permission to re-enter without letting the visa lapse.

The launch of the new visa is coming at a critical time for Thailand and its economy as it struggles to achieve 3% to 3.5% in growth this year, among the lowest in Southeast Asia.

The ailing economy is still suffering from the massive 6.1% contraction seen in 2020 and signs that the country’s critical foreign tourism sector will take some time to recover from the catastrophic effects of closing the country and shutting down the economy during the emergency.

The visas may have a significant impact on future economic development and, not least also, on how foreigners are viewed in the country.

The move is also seen as an antidote to the kingdom’s chronic economic ills which were already impeding economic growth before 2020.

World Bank fears political problems in Thailand as it still eyes 3.5% growth for 2019 in latest bulletin

These include high household debt, a problematic education system, political instability and a vulnerability in the economy due to an overreliance on Chinese economic growth and expansion over the last two decades.

The initiative is the brainchild of ex-JP Morgan boss in Thailand, Chayotid Kridakon who was invited to work with the government by Deputy Prime Minister Supattanapong Punmeechaow.

In April 2021 when it was first proposed, Mr Chayotid predicted that for every long-term visa granted to a foreigner in Thailand, there will be at least ฿1 million generated in direct economic activity per annum in addition to the even more substantial indirect economic stimulus generated by property purchases and investment activity in Thailand’s economy.

The economic team behind the plan are aiming for 1 million new permanent or semi-resident visa holder over the next 5 years who they estimate will ultimately account for up to 5% of the country’s economy or ฿1 trillion a year in income.

It is anticipated that as well as attracting wealthy individuals and economic migrants from western countries who can take advantage of the country’s weather, lower tax rates and lower cost of living while also being able to work globally through the internet.

It will also appeal to well off citizens of countries where authoritarianism or oppression is growing.

Scheme may be of interest to wealthy residents if Hong Kong which has lost 1.6% of its population in the last years with an exodus from the former colony

The 10-year long-term visa will be especially attractive to wealthier residents of Hong Kong which has seen a 1.6% population decline in the last year as those who can afford it, are departing the city where democracy, freedom of the press and the rule of law have been significantly undermined by a more authoritarian approach government dictated from Beijing which has subverted the city’s former freedoms.

The city, formerly a British colony, has seen 113,000 people moving out in the last year, the highest since records began. 89,200 left the year before.

Many have travelled to the United Kingdom where former colonial residents have been offered residency and a path to citizenship while many have also moved to Singapore.

The new Thai Long Term Visa may attract wealthier Hong Kong individuals to Thailand and in particular those who are entrepreneurs or in business.