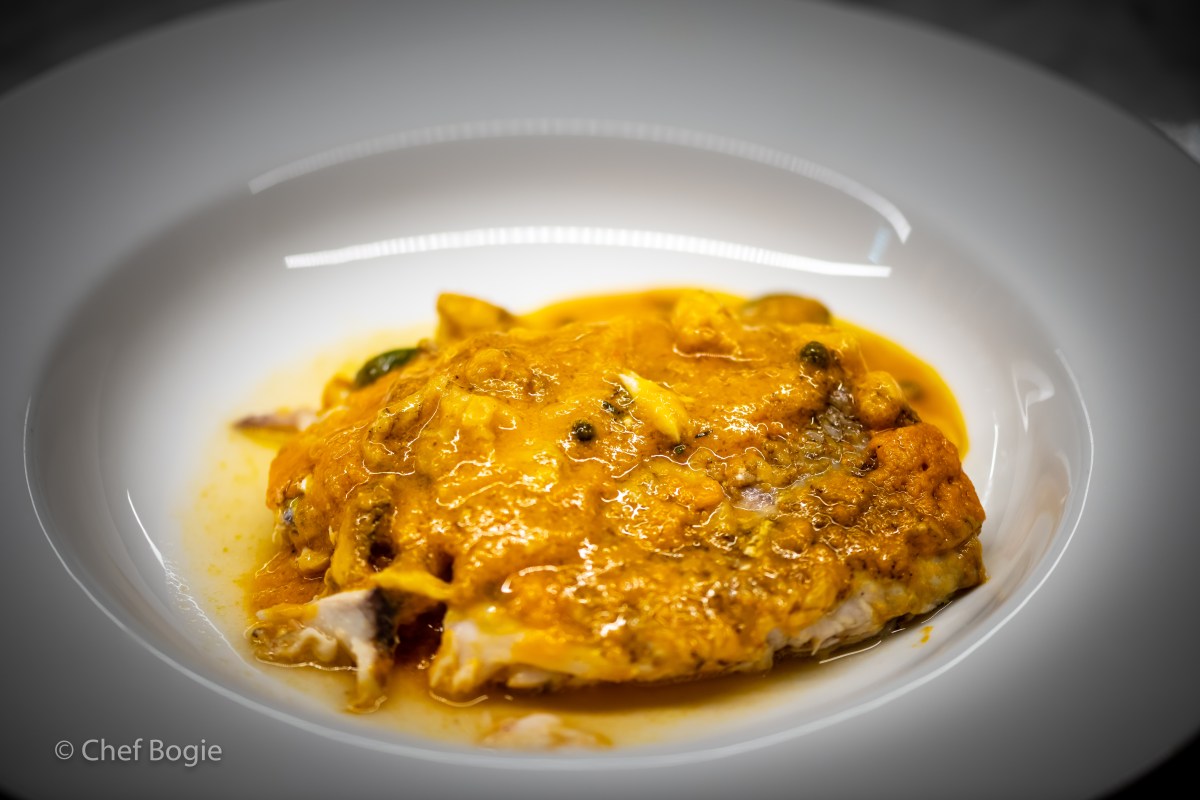 This dish is my attempt to reverse engineer a recipe from the La Rosetta restaurant in Rome. Saal and I went there for the first time in 2008 on a recommendation from my friend Luben Dimcheff, and it was one of those meals you remember. We went back with Luben and my parents in September 2021 and Chef Massimo Riccioli did not disappoint. We ordered a whole fish for the 5 of us, and the sauce was to die for. I told our table I wanted to ask the chef for the recipe but I was sure he was going to tell me something like “two thirds amore and one third gusto”. I still decided to ask… and he did start with “two thirds amore…” but then he told me the rest of it.

First make the sauce. Fill a medium pot with enough water to cover the tomatoes and bring it to a boil. Blanche the tomatoes for 20 seconds in the boiling water.

The point of this is to make the tomatoes easier to peel. Take out the tomatoes with a slotted spoon, and put them in cold water to cool off enough so that you can handle them. Peel the tomatoes.

Slice the tomatoes in half, and with your fingers take out as much of the seeds as possible. Chop the tomatoes roughly, and puree them in a food processor.

Heat a medium sauce pan, and place the tomato puree in it without adding any oil. Tie the thyme bunch with kitchen twine. Bring the puree to a boil, add the thyme, and cook until most of the water has evaporated, and the puree becomes a paste.

Let cool, remove the thyme, and put back into the food processor. Add the anchovy, salt and black pepper, and puree. Taste and adjust the seasoning as needed.

Pre-heat the oven to 400 degrees. You can cut off the head of the fish in order to make it easier to handle, but you will use it in the cooking process, and discard it before serving. Using the head is a very important detail according to Chef Massimo. Season the whole fish with salt and pepper.

Heat a fry pan large enough to hold the fish. Add canola or vegetable oil, and let it heat until it shimmers. Place the fish and the head, the brown them on both sides – 90 seconds per side.

Pour the tomato sauce over the fish. Slice the green olives in 3-5 disc each, and add to the dish. Add the capers and the green peppercorns (if using them).

Cover with the lid and place in the oven. Bake for 20-25 min and carefully check with a fork if it is done. Fish is always much better undercooked than overcooked. Take our of the oven, and let cool to handle.

Carefully take the fish out of the ceramic dish. Discard the head. Carefully filet the fish while removing the bones. You can decorate each plate with a couple of basil leaves (which I forgot). Ready to serve.