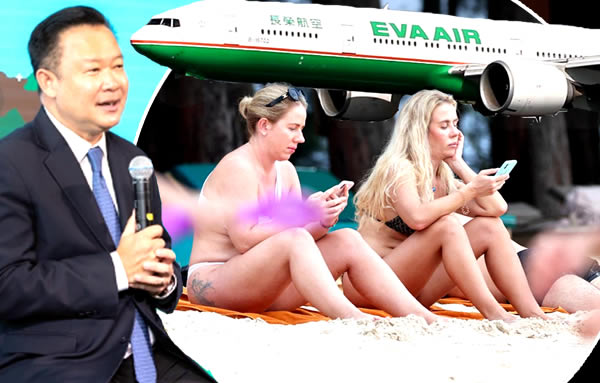 Plans to fly in Russian tourists via charter flights come as European countries have begun to block citizens of the Russian Federation due to the country’s unprovoked invasion of Ukraine which has so far caused the death of 5,827 Ukrainian citizens since the war began on February 24th up to September 11th. This week, the Tourism Authority of Thailand (TAT) told reporters that, in the coming months, airline connectivity between Thailand and the rest of the world will be at 50% of that seen in 2019 as figures reveal a sharp fall off in long haul flights and spending per capita.

Thailand is likely to end the year with just over a fifth of foreign tourism revenue seen in 2019 despite reaching over 10 million visitors due to lower spending tourists. It comes as the kingdom’s tourist chiefs focus on improving flight connectivity to the country which has caused the loss of long-haul visitors from western countries this year with high fares putting off potential travellers. The kingdom is expected to welcome 6 million visitors by the end of this month with plans during the winter months to welcome regular charter flights from Russia.

Thailand’s Minister of Tourism and Sports Phiphat Ratchakitprakarn on Tuesday appeared to throw in the towel on this year’s tourism season when the government forecast somewhere between ฿430 to ฿440 billion in foreign tourism earnings for 2022 despite the country being on target to welcome over 10 million visitors by the end of the year.

This is only 21% of the level the kingdom saw in 2019 and suggests that it will take some time for the industry to make a full recovery.

6 million foreign tourists to have arrived in Thailand by September 30th with 1.5 million a month between then and the end of 2022 says the chief

Yuthasak Supasorn, the Tourism Authority of Thailand (TAT) told reporters that by the end of September, the country will have seen 6 million foreign tourists being cleared, primarily through international airports.

Figures from the start of the year to September 17th confirm 5.43 million arrivals.

Mr Yuthasak explained that from October 1st through to the end of the year or from the start of the high season, Thailand should see 1.5 million visitors a month, bringing the total to somewhere between 10 million and 10.5 million for 2022.

He noted that airline connectivity has been improving and that during this period, the country will see 50% of the flight capacity allocated to Thailand by domestic and international airlines to incoming foreign tourists before the pandemic which has been a factor in stunting the country’s foreign tourism recovery through higher fare prices.

Many hotels in the kingdom are still closed and employment levels, according to one leading hotelier in Phuket last week, Mr Suksit Suvunditkul, the President of the Southern Chapter of the Thai Hotels Association, is only at 50% of what it used to be.

It comes as the trend for the industry this year has seen more Asian visitors from countries such as India, Malaysia and South Korea with a dearth of long-haul western visitors seen since the start of the year.

Up to the end of July, less than 10% of visitors entering Thailand were from the United Kingdom and the United States.

However, sources with the Tourism Authority of Thailand (TAT) suggest that there are signs that the kingdom will see more long-haul visitors from October to the end of the year.

Spend per capita expected to be down by between 11.5% and 14% with more Asian visitors this year

Nevertheless, the projected expenditure this year by foreign tourists is between ฿43,000 to ฿44,000 per head with a figure of ฿44,286 seen by the end of August. This is off by between 11.5% and 14% on the foreign tourism revenue generated per capita for 2019

The Tourism Authority of Thailand (TAT) boss Mr Yuthasak, on Tuesday, emphasised the positive by saying that the recovery of the industry is gaining momentum while pointing to stronger flight connectivity which for much of the year has been limited to 30% to 33% of former levels.

‘Earlier, we were worried about the lack of seat capacity. Even though this obstacle remains, there is a sign of improvement as more international airlines have confirmed their winter schedules to Thailand,’ he told reporters on Tuesday.

He explained that his agency is currently working on the return of flight connectivity as a priority in efforts to underpin the recovery of the industry.

He highlighted Thailand’s efforts to attract foreign tourists from Russia whose nationals are currently facing an expanding travel ban starting with nearby European countries particularly Baltic states including Lithuania, Latvia, Estonia and Poland who have announced that Russian tourists are no longer welcome because of the country’s unprovoked aggression towards its neighbour Ukraine.

Russia invaded Ukraine on February 24th last sparking a raging conflict that has seen tens of thousands of deaths among the armed forces of both countries and the confirmed deaths of 5,827 Ukrainian citizens according to the United Nations High Commissioner for Human Rights (OHCHR).

‘The state of Russia is unpredictable and aggressive. We see that three-quarters of the Russian citizens support the actions of Russia in Ukraine,’ declared Agnė Bilotaitė, Lithuania’s interior minister this week as he confirmed the ban on Russian visitors. ‘It is unacceptable that the Russian citizens who support the war can travel freely in the world, in Lithuania, and the EU.’

Under Thailand’s plans unveiled, this week, targeting the Russian market, tour agencies will fly Russian tourists to the kingdom on chartered flights three times a week starting in the winter high season.

Mr Yuthasak also revealed that the Tourism Authority of Thailand (TAT) is in negotiations with Taiwan’s EVA Air to introduce flight links to Taipei through which international traffic from other parts of the world can also be routed to and from Thailand including European countries.

EVA Air operates a popular flight between Vienna and Taipei.

A key problem for Thailand, at present, is the continued restricted access to some countries such as Japan and China which is having a knock-on effect on access and connectivity to Thailand while leading western airlines are currently prioritising their business bottom line by focusing resources on the most profitable routes.

In addition to this, Thai-based airlines such as Lion Air and Air Asia while committed to resuming and indeed expanding long-haul links with countries such as Australia, Japan and Taiwan, are now prioritising domestic flight operations where there are higher loads.

In the meantime, Tourism Authority of Thailand (TAT) boss Mr Yuthasak has promised more long-haul connections to Thailand over the coming months. He said there has been a pickup in interest in Thailand as the industry begins to find its feet.

‘The aviation trend has slightly changed. There are more enquiries from tourists in Asia and Europe to fly direct to tourism destinations such as Phuket,’ he explained this week at a seminar at the agency’s headquarters in Bangkok.

With Omicron hovering, firms already suffering a cash flow crunch with the economy again in peril