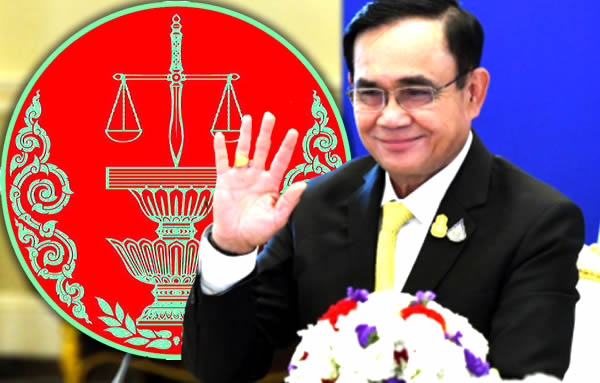 Thailand’s Prime Minister Prayut Chan ocha has been ordered to stand down from his duties by the Constitutional Court as it took up a case questioning the legitimacy of his tenure in office under Section 158 of the Thai constitution which suggested that it expired at midnight on the 23rd August 2022.

Thailand’s Constitutional Court has voted in a majority verdict decision, 5 to 4, to both accept the petition from parliament to hear the case challenging the government leader’s term in office and significantly, to suspend him from his duties as Prime Minister at this time.

The court ruling suggests that the nine judges voted unanimously to accept the case on the basis that the petition by the President of the Parliament Chuan Leekpai was in accordance with the constitution but the split decision was over whether to suspend General Prayut from office in the interim.

This may also be an indicator of the court’s thinking as to the final ruling.

The situation now means that Deputy Prime Minister Prawit Wongsuwan will assume the role and the cabinet will remain in place.

The Prime Minister also retains his role as Defence Minister, a position he also holds but which is not subject to the term limit imposed by Thailand’s constitution adopted in 2017.

The court was responding to a petition submitted through parliament by the opposition under Section 82 of the Constitution questioning the PM’s status in office under Section 158, the provision which limits the maximum period in office for any one person as prime minister to eight years, as well as Section 170.

Foreign Minister heard the news on the media

On Wednesday, Deputy Prime Minister and Minister of Foreign Affairs Don Pramudwinai told reporters that he believed that General Prawit Wongsuwan should take up the role.

He said it was important that the public was not panicked and that it would not impact Thailand’s status as host of the Asia-Pacific Economic Cooperation (APEC)  scheduled for November. Mr Don said he only heard about the news through media reports.

He said what was happening in Thailand was quite normal for any country and simply an internal legal process.

He said he did not envisage General Prawit having any problem with the reshuffle of military appointments due shortly or stepping into relationships with foreign countries as he has already worked within the government and closely with General Prayut.

He also said that he was not surprised by the court’s decision.

General Prayut Chan ocha took up office on August 24th 2014 following the coup that he led on May 22nd 2014 which ousted the remnants of the government of Yingluck Shinawatra from power.

On Wednesday, it was reported the prime minister did not come to Government House as usual and had been conducting official business through video meetings from home.

The seat of government is currently surrounded by police crowd control units and barricades comprising of crowd dispersal vehicles and containers piled on top of each other erected in the last 48 hours.

Earlier, Deputy Prime Minister Wissanu Krea-ngam, the government’s top legal adviser, outlined that it was the duty of all ministers in the cabinet to carry on the government of the country and that failure to do so could be considered a dereliction of duty at this time.

It is not clear how long the court will take to issue a definitive ruling but given the urgency of the matter, most observers do not expect an undue delay.

In the meantime, the ruling has sparked febrile excitement online showing a strong level of public engagement.

In recent days, a huge online and digital TV poll with hundreds of thousands of respondents showed over 93% of Thai people agreed that General Prayut should resign from office.

The court, on Wednesday, allowed 15 days for submissions against the parliamentary petition including documents, affidavits and legal materials to be made by interested parties with standing.

These submissions will, no doubt, outline the two other legal arguments which suggest that General Prayut’s term has yet to expire and propose two future dates, either on the 6th of April 2025 or the 8th of June 2027 based on two alternative interpretations of the law.

In response to the court’s decision on Wednesday, his former spokesman, Thanakorn Wangboonkongchana who has taken up a new role as party-list MP for the Palang Pracharat Party, urged the public to be wary of distorted information or news.

Mr Thanakorn expressed his support for Prime Minister Prayut Chan ocha and said it remained to be seen how the court will ultimately rule on the issue before it while pointing out that the government continues to work smoothly for the people of the country.

‘General Prayut Chan-o-cha hopes that people will respect the decision of the court and avoid making criticism of the performance of the court,’ Mr Anucha told reporters.

Significantly, on Wednesday in an exchange with reporters, Deputy Prime Minister Wissanu Krea-ngam told reporters that General Paryut in a caretaker capacity can still wield the full prime ministerial powers including submitting laws for Royal approval and dissolving the House of Representatives.

Currently, there is a key law being processed through the Prime Minister’s Office for Royal approval in respect of the conduct of General Elections. There will be a five-day window during which it can also be the focus of another Constitutional Court challenge by petition from MPs from parliament.

This is expected to occur with one of the grounds challenging the law expected to be the nature of its finalisation by the House of Representatives last week due to a lack of a quorum.

The new electoral law will have a decisive impact on the outcome of the next General Election.

In its current format, it favours the popular Pheu Thai Party or larger parties. However, it can still be changed or blocked if the Constitutional Court sends it back to parliament or if the House of Representatives is dissolved before it is sent for royal endorsement.

The law or in what format it is passed may be a key arbiter as to who forms the next government with an election now a certainty before March 2023 with consistent opinion polls showing strong support for opposition parties.