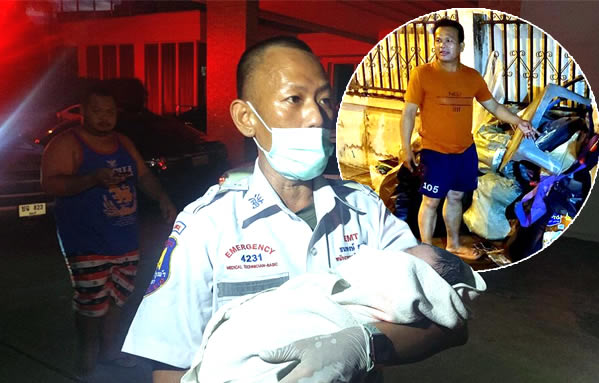 Police believe that CCTV footage retrieved from the building from where a 17-year-old girl was rescued while bleeding heavily may link her with the abandoned newborn. It is understood she will be summoned for questioning when she is released from hospital.

Police in Pattaya have indicated that they are investigating the circumstances in which a newborn baby boy was left in a rubbish heap in the centre of the city early on Sunday morning. The child was found in a distressed state contained in a plastic bag by a passerby when he heard crying noises from rubbish discarded at the side of the road.

Police in Pattaya are planning to summon a 17-year-old girl for questioning after a newborn baby was found by a passerby on Sunday morning dumped among trash in the Bang Lamung area of the resort city.

At 6 am Police Lieutenant Colonel Natthawat Ploenchit, an inspector at Pattaya Police Station, received the report of the baby being found on Soi Photisarn in the Na Kluea sub-district.

54-year-old man, out for an early morning walk with his dog in the Bang Lamung area, made the discovery

The child had been found by 54-year-old Mr Surachai Kaewpha while out taking an early morning walk with his dog.

Mr Surachai heard crying that he initially thought to be a cat but he became more curious as it also sounded like a baby, so he called on a neighbour to come and investigate.

They found a male baby crying and surrounded by tissue paper in a plastic bag.

Mr Surcahai said that the baby had white skin and was moving its arms and legs while crying pitifully.

The two neighbours quickly found a warm, clean blanket to wrap the child in as they summoned the police and emergency services.

At the same time, M. Thanapong Ok-Oun of the Sawangboriboon Thammasathan Foundation, a charity-funded rescue service in Pattaya, received a call from someone nearby who required medical assistance.

Near the address, responders found a trail of blood including placental membrane which led them to the apartment’s quarters where they found the young woman who explained to them that she was suffering from a heavy period.

They urgently rushed the 17-year-old to hospital for treatment while at the same time being made aware of the newborn baby found nearby.

Police Lieutenant Colonel Natthawat told reporters that police were collecting evidence from the scene and had studied CCTV footage from the building where the girl lived.

They strongly suspect she may be the child’s mother.

In it, they saw her wearing a white T-Shirt and a towel while walking with a plastic bag down the stairs where she came out of the front of the building.

She was then seen walking back into the building but leaving behind a trail of blood and went back to her room where she was later met by rescue services.

Police have indicated that their intention, at this point, is to prosecute the woman and are due to summon her later after she has recovered in hospital.

The baby boy is reported to have weighed in at a healthy 3.7 kg when he arrived at hospital. He is reported to be in safe condition with what doctors describe as a strong constitution.

However, he is still being kept under medical supervision.