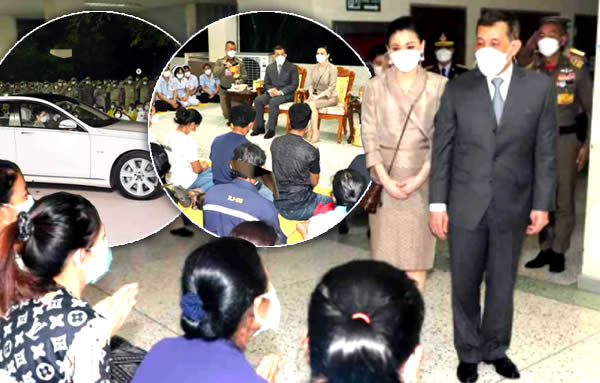 King spoke movingly to parents of the bereaved gathered on Friday night on the first floor of Nong Bua Lamphu Hospital, the day after Thailand’s worst mass murder by a former policeman due in court on Friday facing drug charges and who earlier that day was the subject of a domestic incident reported to police.

King Maha Vajiralongkorn and Queen Suthida flew into the northeast of Thailand on Friday evening to play a key role in comforting families of the victims of Thursday’s horrendous mass murder. The disciplined and well-organised visit saw the King close to tears as he told the families of those bereaved in Nong Bua Lamphu that there were no words he could use to take away the pain and sense of regret but he did offer his encouragement which he told his audience was a gift for all in need at this time. ‘What do we do for the best? It is to provide encouragement to everyone,’ the monarch said.

Thailand’s King and Queen flew into a Royal Air Force base in northeastern Udon Thani province on Friday night to visit a hospital there and in Nong Bua Lamphu to offer moral support to the victims of Thailand’s worst mass massacre in which 37 people lost their lives on Thursday afternoon and seven were seriously injured, five being left in a critical condition.

On Thursday evening, the Royal couple left the Dusit Palace in Bangkok at 6.44 pm to board a Royal flight from Don Mueang Airport and were flown into Wing 23 military airport outside Udon Thani.

After receiving a report from Deputy Governor Suwit on the situation, the King and Queen accompanied by senior privy council officials, visited several patients at the hospital and listened carefully as doctors explained their conditions.

Afterwards, the royal couple met families of injured people and offered them their support and encouragement.

King spoke movingly to the families of the bereaved on the first floor of the hospital, words that were well received by those suffering the pain of loss

The King and Queen together with their entourage then proceeded to the first floor of the hospital where they met families of those who lost loved ones in Thursday’s mass killing by a deranged former policeman, Corporal Panya Khamrab, who was facing trial on Friday for drug-related offences before Nong Bua Lamphu Provincial Court.

The King, while speaking to the relatives, encouraged them to stay strong and work back towards a normal life. However, he spoke movingly about the situation.

‘I feel very sad and sad that something like this happened,’ he told his audience. He said he had no words to explain what had happened and that he was sure no words of his could take away the pain and regret felt by all present.

However, he said that encouragement was a gift that all could offer each other at this time and would help to put the spirits of those lost at ease.

‘What do we do for the best? It is to provide encouragement to everyone,’ the monarch concluded.

Some bereaved family members expressed gratitude to the King and Queen for their visit and words of comfort, saying it had helped them at this dark time

Afterwards, some of the bereaved family members expressed gratitude for the presence of the King and Queen and felt that it had provided some consolation to them at this time.

One of these was Wassana Phothipol who lost her daughter on Thursday as well as three grandchildren and two other close relatives at the child development centre in the Na Klang District of Nong Bua Lamphu in what will be remembered forever as an infamous atrocity.

Ms Wassana said that the royal visit had given her both physical and moral support at this dark time.

She said the presence of King Maha Vajiralongkorn and Queen Suthida had also helped her cope. She explained when they spoke to her and offered her their support, it felt like she was part of a bigger family.

The King and Queen were joined on the visit to the northeast by Princess Maha Chakri Sirindhorn.

At one point on Friday evening, Queen Suthida, who is a professionally trained bodyguard, was seen chauffeuring the King as they travelled in a Royal limousine to Nong Bua Lamphu Hospital.

Later, the royal couple travelled by car to Udon Thani Hospital where they met Deputy Director Dr Sumon Tangsunthornwiwat as well as the acting director.

The King and Queen heard a report on the medical condition of a three-year-old boy, named as Kritsakorn Ruangcharoen, who was injured in the attack before meeting the boy’s mother and father who they presented with a gift basket.

Afterwards, the royal party drove back to the Udon Thani air force base and returned on the royal plane to Bangkok.

On Friday, government spokesman Anucha Burapachaisri confirmed that the King and Queen would personally cover all medical costs for those injured in the Nong Bua Lamphu atrocity.

Prime Minister Prayut Chan ocha, also in Nong Bua Lamphu, urges people not to absorb so much press coverage of the event, worried about mental health

The kingdom is still coming to terms with the terror and evil of Thursday’s atrocity with Thailand’s Prime Minister Prayut Chan ocha, who also visited the northeastern province on Friday, warning the families to limit their absorption of news coverage while he encouraged others not to share or make public disturbing video and photo footage of the nightmare that unfolded on Thursday afternoon.

The PM said he was concerned for the mental state of the families involved and indeed the wider public as the kingdom struggles to absorb what happened.

The carnage of the event in which the killer killed 24 young children as well as teachers and his own family, will however not so easily be forgotten and has already generated political reaction with questions being asked about how the killer enjoyed an extended career within the Royal Thai Police while superior officers knew of his problems with drugs and his anti-social behaviour.

Initial tests on killer’s body suggest he may not have been high on drugs, no traces found in blood samples, the killer’s body was cremated on Saturday

On Friday, the National Police Commissioner General Damrongsak Kittiprapatravled revealed that the officer, who was moved from Bangkok to Nong Bua Lamphu, had no record of disciplinary or drug problems before that time.

General Damrongsak said the policeman, who was known not to use social media, had difficulties reconciling with his wife before his behaviour and drug abuse became a serious issue within the force.

The police commissioner confirmed reports that the killer used a meat cleaver to kill many of the children at the daycare centre.

It also appears, from blood tests on the body of the perpetrator, that he was not directly under the influence of crystal methamphetamine or any drug when he launched his murderous rampage on Thursday.

Hastily organised cremation of the killer

This was, reportedly, deduced from the results of tests taken during an autopsy of the killer’s body and samples taken.

However, further tests are reported to have been ordered even though, on Saturday, the man’s body was cremated at a hastily convened funeral ceremony at a temple near Udon Thani, the only one where monks would permit the event to go ahead.

The police chief also revealed that there was a domestic incident with the man’s wife reported just before Thursday’s onslaught.