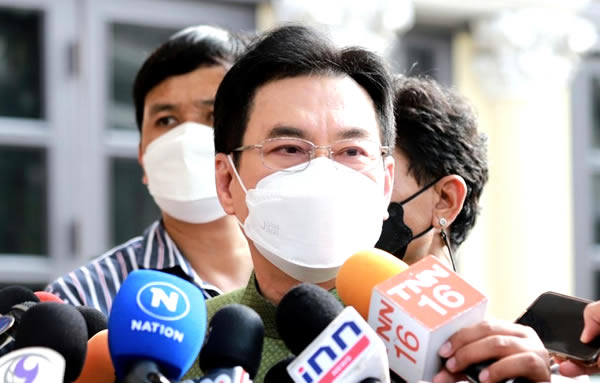 Speaking on Monday, the minister reaffirmed his party’s opposition to the government’s marijuana bill. The deputy prime minister said the liberal availability of cannabis was not in the national interest and that this was the main concern of the Democrat Party and its parliamentary members.

Minister of Commerce and leader of the Democrat Party Jurin Laksanawisit has unveiled a higher-than-expected 7.8% rise in exports for September which beat market expectations although Thailand still recorded a trade deficit for the sixth month in a row and a deficit for the first nine months of 2022. On Monday, the deputy prime minister told reporters that his party still opposed the government’s proposed bill on marijuana and a more liberal regime in relation to cannabis. It was considered not in the national interest.

Minister of Commerce Jurin Laksanawisit addressed a press conference in Bangkok on Wednesday in which he unveiled better-than-expected export data for September which significantly beat expectations according to a Reuters poll of economic observers.

Exports, driven by food and agricultural produce and industrial goods, surged by 7.8% for the month compared to a forecasted rise of 4.2%.

Exports rose 10.6% for the first nine months of 2022 compared to last year but the kingdom still ran up a trade deficit with a surge in import costs

The minister told reporters that for the first nine months of 2022, exports had risen 10.6% compared to the same period last year.

However, the kingdom still recorded a trade deficit for the sixth straight month in a row but this came in sharply below the forecast of the Reuters poll at $850 million compared to a projected figure of $2.9 billion.

The trade deficit for August was $4.2 billion.

The deficit was driven by a 15.6% rise in imports which was below the projected figure of 20% although imports continued to grow faster than exports.

The Commerce Ministry issued a statement welcoming the rise in exports and pointed to a worldwide heightened demand for foodstuffs and a weaker baht as key drivers.

However, with 75% of goods sourced abroad, according to the Bank of Thailand this week, priced in US dollars, the continuing weakness against the US currency is driving up the costs of imports.

So too is the elevated price of oil with West Texas Intermediate (WTI) crude price at $86 a barrel on Wednesday, well below the peak this year of $108, seen in early June but up on last year.

The baht, on Wednesday, was priced at $37.77 after dropping sharply from $38.22 as market speculation in the United States again mounts that the Federal Reserve may take its foot off the pedal regarding proposed interest rate hikes with tepid corporate results in recent days showing a significant slow down in earnings on Wall Street.

On Monday, Deputy Prime Minister Jurin Laksanawisit, the leader of the Democrat Party, spoke with reporters in Bangkok about his party’s opposition to the Marijuana Bill that the government is still trying to push through parliament.

He said his party’s position on the bill is quite explicit and that it has never supported the wider availability of cannabis as a drug except for its use in medical applications.

He said the current liberal, free for all is something that his party is opposed to and would not help promote.

Asked about the possible impact of this position on relationships with the Bhumjaithai Party and within the coalition government, Mr Jurin said the priority must be putting the country first and that each party’s position does not have to always be the same.

He again stated his party’s opposition to the free availability of marihuana as is now generally accepted to be the case in Thailand following the Bhumjaithai Party’s liberalisation campaign this year driven by Deputy Prime Minister and Minister of Public Health, Anutin Charnvirakul.