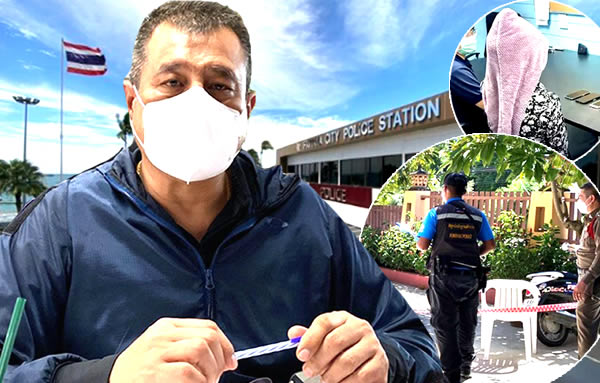 The story of Anara Seitaleva shines a light on the shady world of transnational human trafficking linked with Thailand’s sex industry. It also raises questions about the apparent ability of Chinese criminals to operate freely in the kingdom and their links with Laos, Thailand’s neighbouring one-party Communist state closely linked to China.

The death of a 30-year-old Kyrgyz woman in central Pattaya last Friday whose body was found at a high-end condominium complex surrounded by cash is raising disturbing questions about human trafficking in Thailand and the operation of Chinese gangs after it emerged that the woman had filed a complaint with Pattaya Police on Tuesday the 13th September, three days before her death, saying she was on the run from a gang who had duped her into travelling to Thailand in July and forced her into prostitution in Bangkok.

Thai Police including the Cybercrime Division and police in the resort city of Pattaya are working on an expanding investigation into the suspicious death of a 30-year-old woman from Kyrgyzstan who fell from the seventh floor of a luxurious condominium in Pattaya on Friday.

The woman had, days earlier, filed a police complaint against a Chinese human trafficking gang which had lured her to the kingdom in July and forced her into prostitution in Laos and subsequently in Thailand.

Woman escaped her Chinese controllers on September 11th, fled to Pattaya and two days later made a statement to police detailing her ordeal with names

The woman, named as 30-year-old Anara Seitaleva, according to her testimony to police in Pattaya, escaped the Chinese gang on September 11th last when she fled Bangkok where she was working in a prostitution ring, to Pattaya seeking the help of a German national in the country that had become known to her.

According to Ms Seitaleba’s statement, on Tuesday last, she was on the run and living in fear of the gang consisting of two Chinese women and one man from Hong Kong.

Over the weekend, it was reported that police had sought arrest warrants for three individuals while taking into custody a Chinese woman named as Rou Li who is 27 years of age.

An arrest warrant was issued by Pattaya Provincial Court for Ms Li’s arrest on Sunday together with one for the arrest of 32-year-old Ms Song Li and Hong Kong man Mr Nin Wan Su who is reported to be 48 years old.

Arrived in Bangkok on July 15th, within 24 hours, she was working as a prostitute across the border in Laos before returning to the capital on July 17th

According to the statement given to police by the victim in this case, Ms Seitaleva, who plunged to her death on Friday, a Chinese man met her at Suvarnabhumi Airport on July 15th last when she flew in from her native Kyrgyzstan.

This man has been identified over the weekend as Hong Kong national Mr Nin Wan Su.

Kyrgystan is a landlocked country in central Asia bordering China, Kazakhstan, Tajikistan and Uzbekistan whose capital is Bishkek.

The country has a population that is approximately 90% Muslim with a 7% Christian community. It is very poor, ranking only 166th in the world with a GDP per capita of only $1,327 compared to $7,449 for Thailand.

It was formerly part of the Soviet Union and became a republic in its own right on 31st August 1991 after the fall of the Communist regime in Moscow.

On Friday, details of the ordeal experienced by the woman were given by Police Major General Thitawat Suriyachai of the Cyber Crime Investigation Bureau.

The body of Ms Seitaleva was found by police on the same date at midday in the city centre of Pattaya at a luxury condominium complex on Thap Phraya Road.

It was surrounded by Thai banknotes that were reportedly thrown out of the apartment window as she fell to her death.

Police are investigating the highly suspicious circumstances surrounding her death and are reported to have not ruled out the possibility that the woman may have been murdered with suicide being another line of investigation being looked at.

Officers report that there was no sign of a struggle by the woman in the luxury apartment where she was staying while they also retrieved prescription medication including antibiotics and antiviral pills at the scene.

She has asked for the couple’s assistance and a place to stay after she made her escape from the human trafficking gang on Sunday Sepetmber 11th.

Offered ฿20,000 a month in Kyrgistan to work in the Thai tourism industry by a Chinese human trafficking gang operating in Bangkok, Pattaya and Laos

Ms Seitaleva’s nightmare began in Kyrgyzstan after she accepted an offer to work in Thailand’s tourism industry by the gang with a promised salary of ฿20,000 per month.

On July 15th last, she was met at Suvarnabhumi Airport by Hong Kong national Nin Wan Su who took her to a hotel in Bangkok where she stayed the night. The next day she travelled with the Chinese national to Chiang Rai in northern Thailand.

The pair both entered Laos on July 16th at the immigration checkpoint in the district of Chiang Saen. That is when things turned very sour for Anara.

She was placed in a hotel room with armed men at the door as the Chinese man also took her passport.

Ms Seitaleva was told she would have to work as part of a call centre operation in the Communist country.

However, she was unable to carry out this work to the satisfaction of the gang and was informed that she would have to work as a prostitute.

She told police officers on Tuesday that the gang filmed her while having sex with customers on Friday 16th of July to use the video clips for blackmail purposes against her if she later attempted to escape.

On July 17th, she was flown back to Bangkok where she was introduced to a sex racket controlled by Chinese men and women where she was forced to provide sexual services until her escape on September 11th last.

She achieved this by hiring a taxi in Bangkok which took her to Pattaya where she was offered shelter by the German man and his girlfriend.

She later made her statement to police in Pattaya on Tuesday 13th only to be found dead outside her place of refuge three days later on Friday 16th.

Raids by police in Pattaya and Bangkok

On Sunday, police in Pattaya raided a property in the centre of the resort city and arrested the Chinese owner named as 45-year-old Wang Gang who is reported to be the husband of one of the suspects wanted by police in connection with this harrowing case.

There are also reports of a police raid in central Bangkok, in the Asoke area of the capital.

As part of the police investigation into the death of Ms Seitaleva and her horrific story of abuse, police are understood to have also ordered an autopsy and will be looking to confirm reports that the woman may have been raped before her death on Friday.

Human trafficking charges and charges in relation to false imprisonment will likely be brought against all those arrested in connection with the affair.

The Royal Thai Police is reported to be liaising with the Kyrgyz embassy in Bangkok in what is a very disturbing case which raises very serious as yet unanswered questions about the ability of Chinese criminal gangs to operate in Thailand with impunity until an incident like this occurs, the links with Laos and the conduct of human trafficking operations preying on women from less well off countries.