Car hire costs have risen globally. A study reveals that the most expensive place to hire a car is Iceland.

In July 2021 they were over 40 per cent up on the year before in the US, and not far behind across Europe and prices for Summer 2022 are heading to even higher levels. Have car rental companies become greedy? Actually no.  Blame Covid.

Car manufacturers were once keen to work with car hire firms and offered cars at a discount. This was reflected in the price customers would pay. Unfortunately, Covid travel restrictions meant demand for cars dwindled which lead to car hire companies reducing their fleet sizes even selling their cars just to generate income. This then led to a fall in the demand for car computer chips since new cars were not being manufactured to the same extent.

Now that the world is rearranging itself to some sort of normality fleets can now be replenished. However, manufacturers are unable to produce enough cars to meet their needs the discounts have disappeared. Which means customers pay more.

So which countries are the most expensive and the cheapest places to hire a car.

Iceland is the most expensive country to hire a car in.

Iceland ranks as the most expensive country to take a road trip in, with the cost of car hire averaging £1,041 a week to rent a car and fuel it with a tank of petrol. Iceland was followed by popular travel destination New Zealand, with it costing just shy of £1,000 a week (£947) to rent a car in the country. Argentina, Jamaica and Israel complete the top five most expensive locations, with the cost of car rental ranging from £574 up to £805 a week for rental and fuel expenses.

Along with Iceland, several other European countries made the top 10 destinations where it costs most to rent a vehicle, including Switzerland, Austria and Ireland, where costs of hiring a car average over £490 a week. In fact, European countries dominated the overall top 20 most expensive countries to rent a car in, with 10 destinations from the continent featuring in the top rankings.

Ranking in 16th position was the United States of America, where it costs £455 a week to rent a car – less than half of the cost of renting a car in New Zealand or Iceland. With less than £40 between them, popular European holiday-maker destinations Malta, Greece and Italy follow the US, with it costing between £421 and £445 to borrow a vehicle and see the sights from the comfort of your car.

Thailand is the cheapest country to hire a vehicle in

The cost of renting a car in Thailand, the cheapest country to hire a vehicle in, equals just 11% of the cost of renting a car in Iceland, the most expensive destination. Costing just £124 on average for a week’s rental and fuel, those looking for an adventure on wheels could roam around the tropical southeast Asian country for over eight weeks, and still not spend as much as if they were to drive a vehicle in Iceland for one week.

Following closely behind is Azerbaijan, with average costs of £157, and Lebanon ranks in the third position with costs of £184 for the week period. 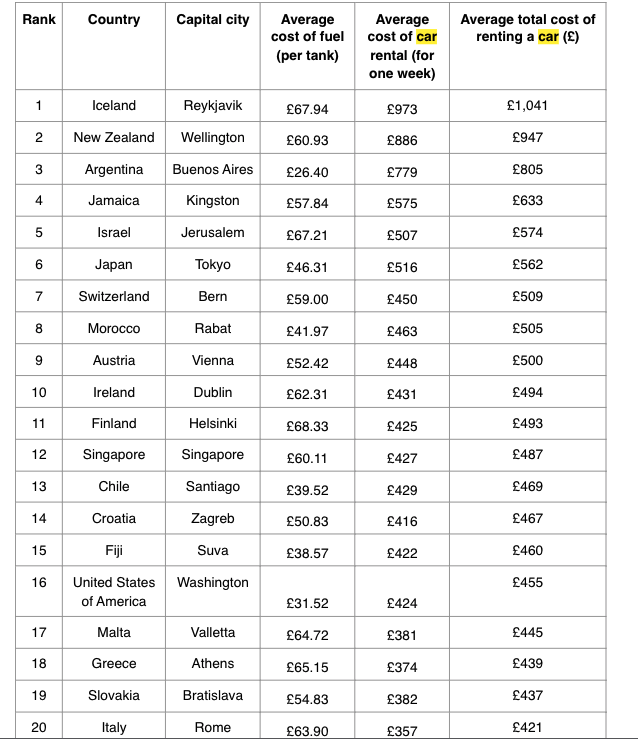 Just missing out on making the top 25 most affordable countries to rent a car in, the UK ranked in the middle of all the countries analysed in the research, with car rental in the country costing £338 overall.

“Driving around your holiday destination of choice can be a great way to see a city on your own terms.

However, if you’re planning to hire a car abroad it’s important to do your research beforehand and be prepared. Drivers from the UK will need a full driving licence, their driving licence code, proof of address (such as a bank statement) and photo ID to rent a car in Europe. If renting a car further afield, then you may need documents such as an International Driving Permit. And of course, you’ll need car insurance wherever you’re looking to rent a vehicle.

“When collecting your rental car, you may be offered a range of optional extras, including breakdown cover, music-system cover and more. Some of these can be useful, some less so. To avoid getting pressured into signing on the dotted line at a tourist desk, make sure you know what you’re covered for, what extras are available and which of them you want before travelling.”

Note: Drivers from the UK need a full driving licence, their driving licence code, proof of address – like a bank statement – and photo ID to rent a car in Europe.