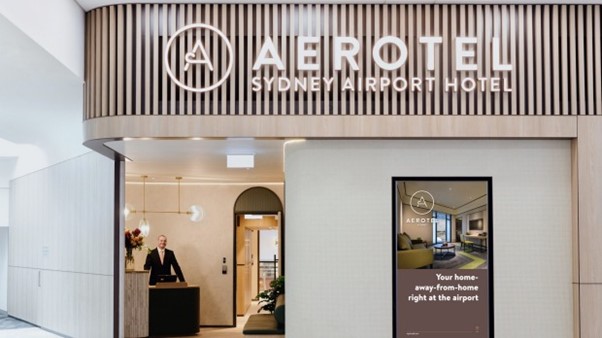 Built by airport hospitality experts Plaza Premium Group, the hotel has 15 single and double rooms that can be booked by the hour in the arrivals area of T1 International. Aerotel has just opened within Sydney Airport’s International Terminal, Australia’s busiest international hub.

The well-prepared traveller who needs to catch an early flight understands the travel equation: arranging a stay in an airport hotel equals early departure minus worry. The biggest advantage is proximity; the distance between Aerotel and international check-in is less than 100 metres.

The business model is significant; like all onsite airport hotels worldwide, it can be booked for blocks of time, in this case, three-hour, six-hour, and overnight stays, with variable check-in and check-out schedules. It is effectively billed based on the amount of time the space is used.

That means convenience not only for Sydneysiders looking to beat the unpredictable morning traffic but also for interstate flying in for the same early flights which may want to avoid domestic delays and comfortably make their ex-Sydney departure by arriving at Kingsford Smith the night (or hours) before.

It’s also useful for visitors to Sydney who have checked out of their hotel, spent the day sightseeing, and want to unwind and refresh before a night-time flight.

There’s also a new Plaza Premium Lounge nearby (the Aerotel network, which now has ten hotels, is owned by global lounge operator Plaza Premium), which hotel guests can access for $25 and enjoy the food, and drink, and business amenities.

The lounge is an option for non-hotel visitors ($45), such as those arriving by plane or at the airport on land who wish to shower, change, dine, and gather their thoughts before continuing their journey.

The lounge is an option for non-hotel guests ($45), such as those arriving either by plane or at the airport landside who want somewhere to shower, change, eat, gather thoughts, and perhaps do some work before continuing with their journey.