With over 7,000 years of fascinating history, traditions and culture the emirate of Ras Al Khaimah (just 45 minutes from Dubai) offers an authentic and easily accessible Arabian experience. Ras Al Khaimah is a nature-driven destination of sprawling deserts, beaches and stunning mountain landscapes and is one of seven emirates that together comprise the United Arab Emirates (UAE).

If you’re planning a trip, here’s our pick of the top 8 things to see and do.

Due to its geographical location at the northernmost tip of the UAE, Ras Al Khaimah is literally translated as ‘top of the tent’ and was originally known as ‘Julfar’. To the far north, the emirate borders with the Sultanate of Oman, where the sheer rocky Hajar Mountain slopes appear to rise out of the sea.

Jebel Jais, within this mountain range, is the UAE’s highest mountain peak at 1934 metres (almost 2 km) and is home to a series of exciting, sustainable adventure projects. 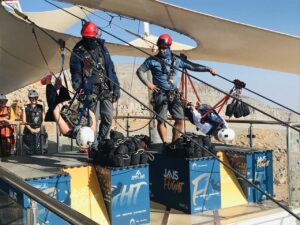 Setting off the world’s longest zipline

Foremost amongst these is The Jebel Jais zip line flight:  the world’s longest zipline at 2.83 km (equivalent to over 28 football fields). It is located atop Jebel Jais, the highest mountain in the United Arab Emirates.

Full disclosure, I bottled out of doing the zip line but judging by the smiles and euphoria of the adrenalin junkies I met who had just completed the flight, it is for many the undoubted highlight of a trip to Ras Al Khaimah.

I enjoyed the drive along the switchback road which snakes up the mountain delivering vistas of barren, eroded cliffs and deep canyons on every bend with The Jais Viewing Deck Park being the perfect place to stop and unwind, to take a few photos of the view and admire instead the daredevils taking the Jebel Jais flight.

The Jais Zipline Sky Tour offers an alternative experience, covering a total distance of 5 km via a series of 6 ziplines in the more traditional zip line seated position as opposed to the superman pose adopted in the Jais flight. 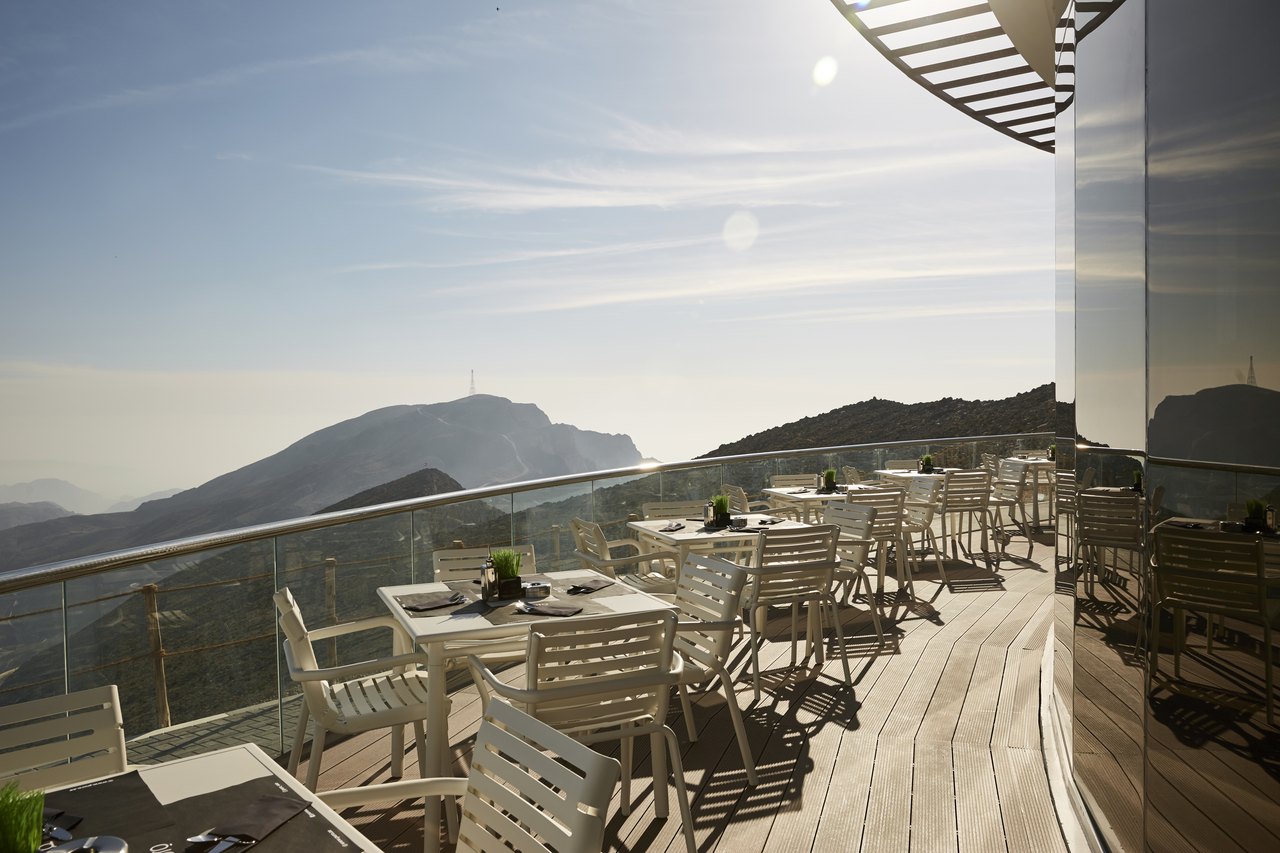 The view from 1484 by Puro terrace

1484 by Puro, a unique restaurant boasting a magnificent panorama of Jebel Jais and its otherworldly landscape is named according to its height above sea level – 1,484 metres.

The UAE’s highest restaurant has an exciting, Mediterranean menu including fresh burrata, grilled salmon, pan-fried sea bass and juicy burgers served in a sleek, modern interior and an outdoor terrace. It overlooks the Hajar mountains,  and I came for the views but was pleasantly surprised by the quality of the food served.

This is no normal tourist trap restaurant tagged on to an attraction with overpriced, mediocre food but a gastronomic experience worthy of a visit alone.  I dined out on succulent and fiery wasabi tempura prawns with the traditional sticky toffee pudding at the end of the meal being especially memorable.  The food alone was Instagram worthy but there are plenty of other photo opportunities along with the views including a peep through the board (with the mountain view in the background) highlighting that you are standing at 1,484 metres. 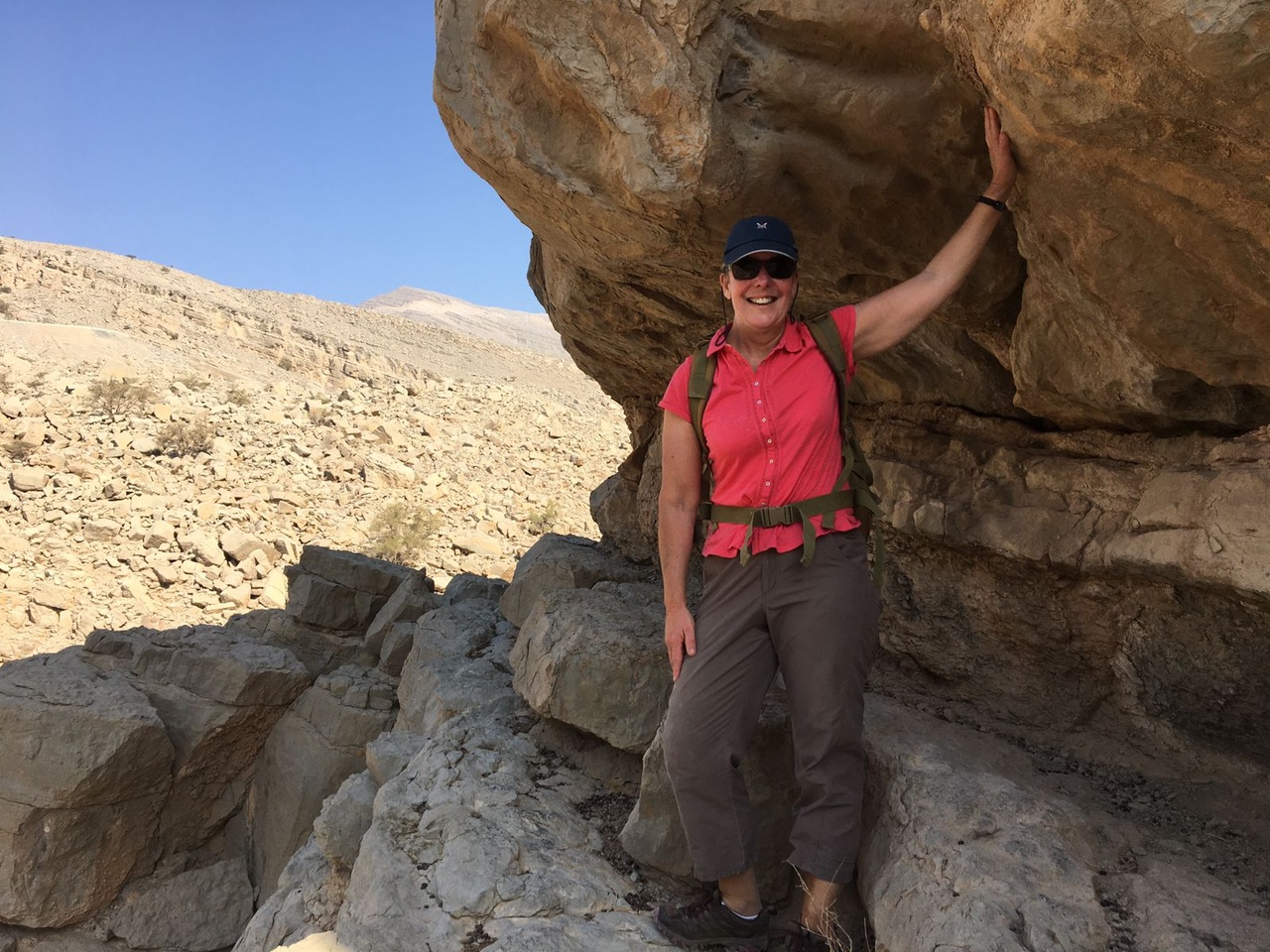 The Bear Grylls Explorers Camp made its regional debut on Jebel Jais, offering the world’s first Bear Grylls branded accommodation.  The recycled 16 lodges were designed to host up to three adults or two adults and one child with self-catering facilities.

The camp offers a variety of courses developed by Bear Grylls, putting participants face-to-face with some of the toughest terrains in the wilderness.  They receive hands-on practical training and extreme survival techniques.  In addition to staying the night in a Bear Grylls cabin, guests can try their hand at mountain biking, archery, hiking and abseiling as well as the Jebel Jais Via Ferrata or the Ropes Course – a self-guided adventure on two levels, 10 meters above ground.

It was here that I spent a morning trekking through the rugged, rocky, mountainous landscape.  Bear Grylls’s mantra is to challenge yourself and to prove you can do anything #NeverGiveUp and with this in mind I dared myself, having reached the top of the mountain to abseil down.

I didn’t really have much of a choice as this was the only way to descend.  However, I knew I was in safe hands as my charming and confidence-boosting Indian guide had been part of the first Indian team to climb Everest.   Abseiling for the first time was a daunting prospect (it’s a peculiar but exhilarating experience as you lean backwards, facing the rock, to slowly lower yourself down) but above all the challenge was fun and rewarding.

Dune bash in the desert and BBQ

Experience a thrilling drive in a 4 x 4 across the desert, climbing sand dunes, often at a 45-degree angle.

The Dunes Safari and Camping offers this unique experience of the Arabian desert followed by a short camel ride, sand boarding, a bbq dinner, tanoura (an Egyptian folk dance) and belly dancing performances.

Book this tour Afternoon Desert Safari and BBQ Dinner From £45.95 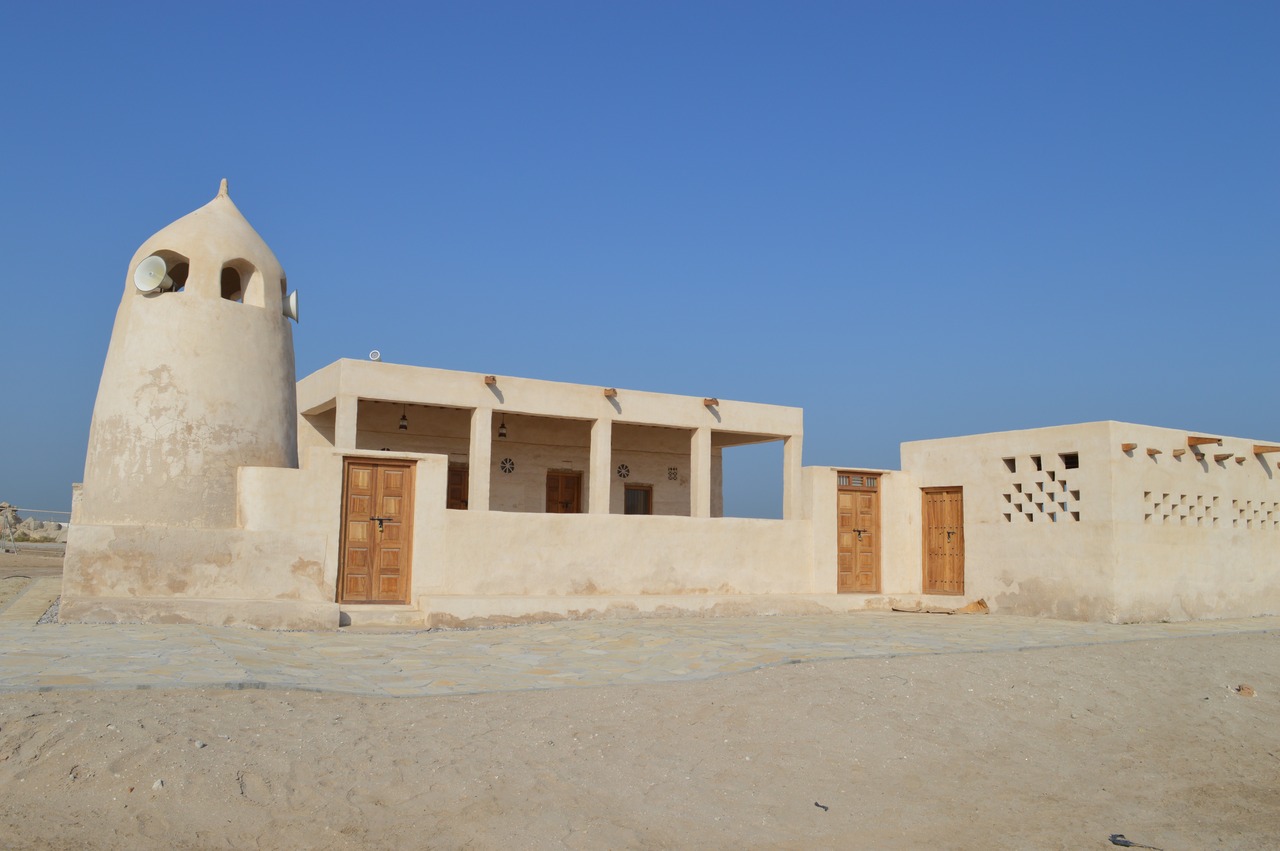 With a rich history dating back to the Bronze Age, Ras Al Khaimah is dotted with historical sites including ruins and forts. Built in the middle of the 18th century during the emirate’s invasion by Persians, the National Museum of Ras Al Khaimah was originally the house of the Royal Family until 1964.

In 1987, the late Sheikh is Al Qasimi opened the museum which includes a collection of archaeological and ethnological artefacts.  There’s also a fine wind tower looming over a pleasantly shady courtyard within.

Jazirat Al Hamra, an abandoned coastal village occupied since the 16th century and abandoned nearly 40 years ago is another interesting place to explore.  The villagers who lived here were mainly into fishing and pearl trading.

Both the museum and Jazirat Al Hamra are included within a city tour and although the mountains, adventure opportunities and beach are Ras Al Khaimah’s main draw, it’s still interesting to wander the city souks, admire the pearly white mosques and stroll along the corniche.  My visit was just days before the UAE’s golden jubilee, so the city was looking particularly cheerful with hundreds of green, white, black and red Emirati flags flying in the breeze.

Learn about the Pearl Diving history 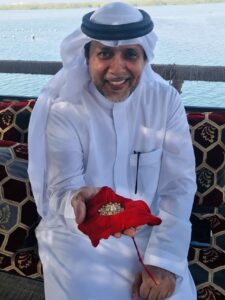 The Suwaidi Pearls Farm was established in 2005 by prominent Emirati Abdulla Al Suwaidi (grandson of a commercial pearl diver) and is the first farm of its kind in the Gulf region.  The farm cultivates the gulf pearl oyster, using locally sourced molluscs that live in the natural creek in Al Rams, a small town in Ras Al Khaimah and once a pearl diving and fishing community.

You are taken out to the farm (a floating platform), through the mangroves by traditional dhow where you learn the history of pearl diving, explore a pearl diving boat, learn how to properly open an oyster and if your budget allows purchasing some jewellery.  This was a fascinating excursion but what stuck most in mind though was that the pearl divers of old would need to do at least 100 dives to find just the one pearl.  Without goggles they would see underwater with one eye, protecting the other eye with their hand and tragically consequently many in later life would go blind.

Relax on the beach 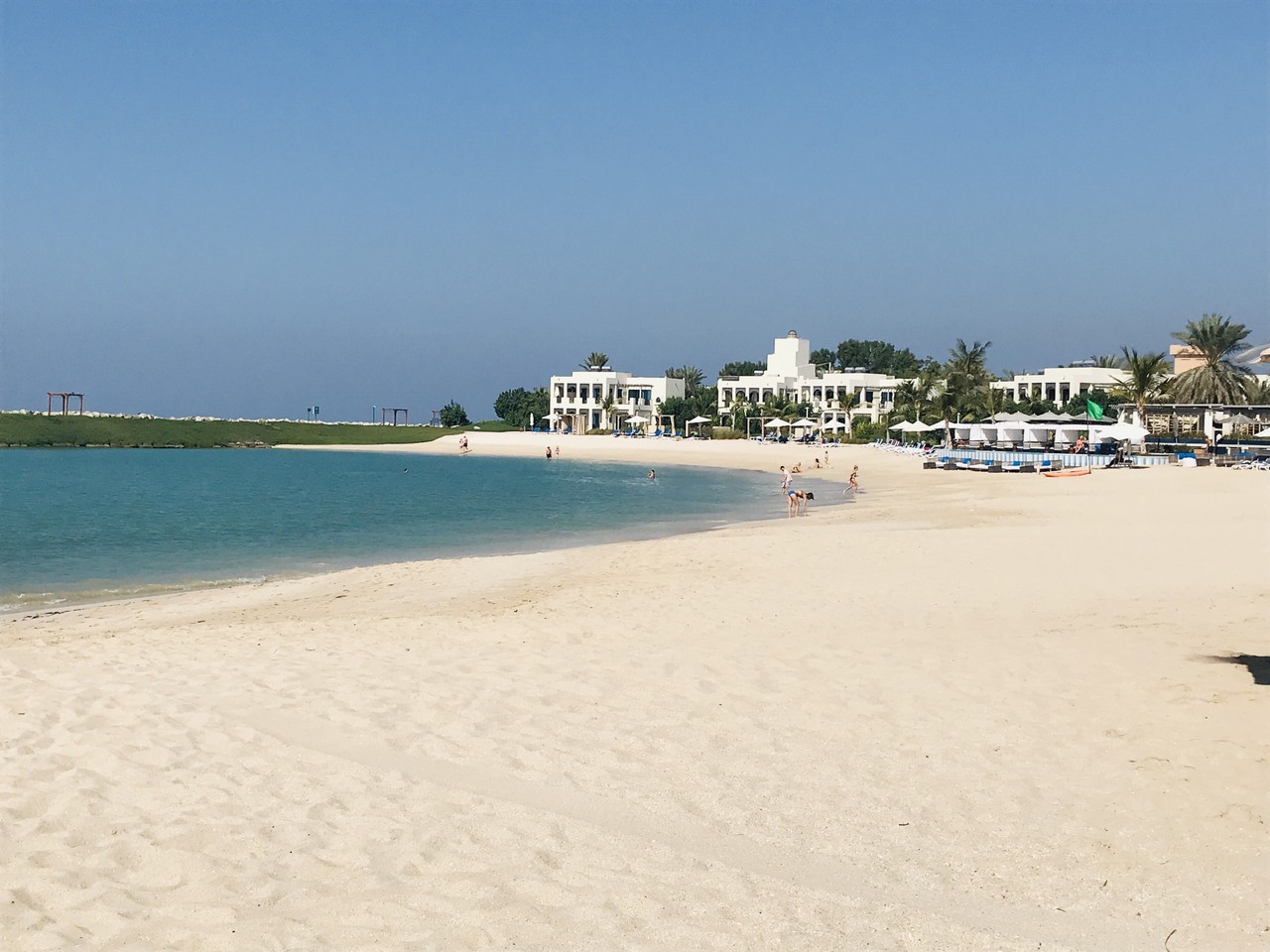 Relax on a beach – 64 kilometres of shoreline

Soak up the year-round glorious sunshine on one of the UAE’s best beaches. Situated on the west coast of the UAE, Ras Al Khaimah’s 64 kilometres of shoreline provide superb sandy beaches, clear crystal blue waters and a more relaxed and low-key vibe than its neighbours.

Most holidaymakers (myself included) stick to their resort hotel beach.  The long shoreline is strung with luxury resorts all offering their own private patch of golden sand.

I stayed at Hilton Ras Al Khaimah Beach Resort, where the 0.9 miles of private white sandy beach was swept daily and pristinely clean.  I’m not one for waves and appreciated the calm waters and child-friendly, gently lapping shoreline.

And finally, things to look forward to

As an emerging tourism destination, Ras Al Khaimah has an enormous number of new hotels, desert camps, glamping experiences and attractions set to open in the next couple of years including Jais Wings, a paragliding experience from the top of Jebel Jai with landing pads near Saraya Islands and Al Rams; Jais Swing, an instagrammable swing made of twin ropes providing amazing views and the Jais Sledder, the region’s longest toboggan ride that runs a length of 1,840 metres.

ENJOY:
The Dunes Safari and stay overnight in a dune thedunesuae.com
Explore with Bear Grylls: The Bear Grylls Explorers Camp